Well it's been a long time since I've gotten a new CD... Superman Returns (by far the only great thing to come from that stupid movie!) is my last purchase, and some cool mix CD's Peter made me at the end of summer.

I was starting to enter that music boredom state of apathy with my existing collection (further helped by my lossing about 1/3 my music collection to techincal problems). So it is a good thing I finally got something to shake things up.

That being David Arnold's score to Casino Royale. Arnold has been a long time favorite of mine having done the scores to both Stargate and most important in my junior high days Independence Day. This is his fourth Bond score, but I had no idea he was signed on for this one till I saw the CD in HMV. I just recall I really enjoyed a few sequences of the music from the film. Makes sense he is usually really good (except in Bond films. Tomorrow Never Dies was awesome like the film, but he's last 2 bonds were kinda blah). 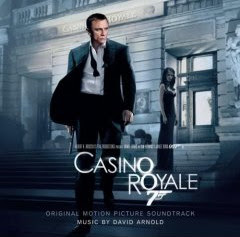 Listening to this I am forced to think of our dear friend Traumador the Tyrannosaur and his current undercover exploits. Hopefully he fairs better then 007 in this film. The score captures the darker tone of the movie perfectly.

Casino Royale by David Arnold: 7.5/10
Posted by Prehistoric Insanity at 5:16 AM