I REALLY shouldn't be taking anytime from my planning for placement (which I'm on now by the way) as I'm way behind at moment.

However I need yet another brain retuning break and this won't take too long.

For a while now I've heard rumours and "legends" of unidentified birds that live in the botanic garden beside Salmond. There were said to be unmistakable from the local birds (which is saying something we have a LOT of different bird types here in Dunedin alone). They are VERY colourful parrot looking, and just look like they belong somewhere tropical.

Yesterday while walking through the park with my camera, an odd coincidence caused solely by a skool project I was scrambling to finish, I saw the fabled garden birds... two of them in fact.
_ 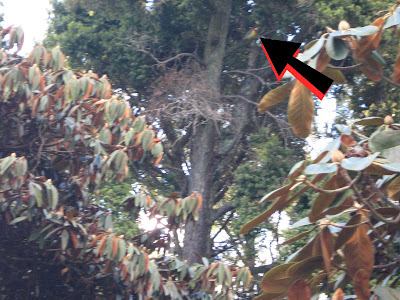 More amazing was the fact that one of them flew away and landed on a "close" by tree and remained their while its companion disappeared from view. Knowing that if these were like other rare sightings such as Bigfoot or loch ness I needed to fire off my blurry photos THEN! 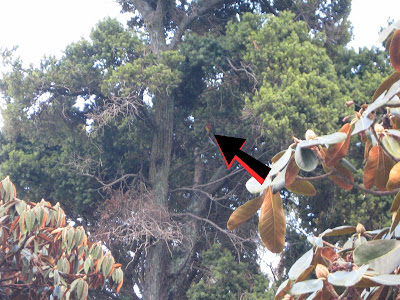 Sadly I won't be making a million dollars from globe weekly news. The birds it turns out aren't as mysterious as student fables would led one to think. Asking Scott he promptly told me these are some escaped Australian parrots from the Aviary. Which is funny enough located in the Garden. Despite this they are now on their 2nd or 3rd generation none the less which is kind of impressive.

An odd anomaly in my otherwise work intensive life at moment so I thought I'd share it. Speaking of work need to get back to it...

Despite having tons of work to do these days last night being Friday I decided to kick it back a little bit (especially since I'd had a really stressful day).

Some of the people here at Salmond asked if I wanted to play RISK not realizing who they were inviting in.

FLASHBACK: Circa Calgary the Last 2 Years 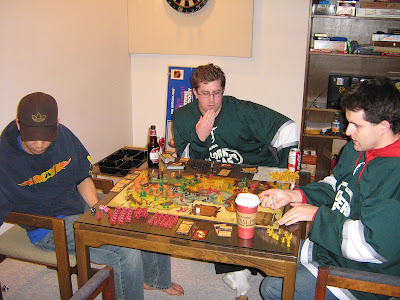 Now before that tale is told it should be disclaimed that I've played my fair share of RISK. As of me and Brett discovering Lord of the Rings RISK it was a rare thing back in the day for us to go a month without at least one or two RISK engagements.

In fact here is a picture from my fair well party in Calgary back in December where the main event was you guessed it "the last RISK game". Fittingly I departed with victory if I recall properly (if I recall improperly then Brett won, but I made him work for it :P ).

Point is I know my RISK (especially after playing some 2 player tactic practise runs the last 2 years). The poor Salmond people had no idea what they were invoking... 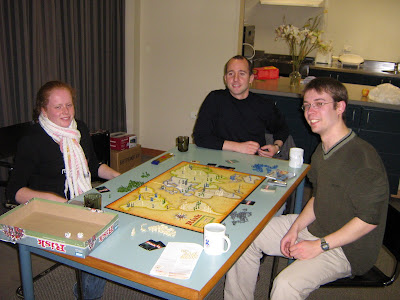 The suffers of the wraith Rhonwyn, Stefan, and Andy. Now overall it was a very civil and enjoyable game. Minus one problem:

They didn't know the "proper" rules...

Now in their defense they were playing consistently which is key. However being a bit of a RISK junkie who takes the game a little religiously these days I had some opposition to these delving from the rules.

So in many a ways I was the bad guy, but at the same time I was proven right about how their rule alterations led to disadvantages for the players going last.

Brett and I had gotten to a point where we'd come up with our own modified advanced rule set that made the game nearly completely fair for everyone whether first or last in turn order. This however makes us dorks of the utmost.

For a few minutes my pointing out the real rules in the rule book was leading to a heated argument with Andy till an accident defused the whole thing, and kept the peace (above board anyways :P )

Now I've seen games of RISK where arguments were so bad players would be thrown out of the house and banned due to the disagreement about the game. This was no where near that level. However it was getting heated. Andy was getting annoyed. 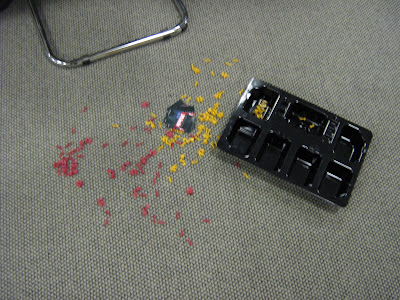 I jokingly compared this to the games of old "look if this argument had happened with some of my friends they'd pick up the board and throw all the pieces everywhere." However what amazed me was that to my surprise a moment after completing that sentence (and I do mean a moment) suddenly the sound of RISK pieces scattering on the floor filled the room...

In the midst of my dramatic motion of my arms I'd taken a step backwards inadvertently stepping on the corner of the game insert holding the spare pieces not in use, and thus sending them flying all over the place (note picture above).

This completely disarmed the argumentative stage of the game as both me and Andy collapsed on the floor laughing with everyone joining in once they realized I'd somehow carried out my prophecy.

With that out of the way and moderately corrected rules in place it was down to business. Now to be both boasting and modest I cleaned house, but I still lost. They had a version of RISK with mission cards. Not as complicated as Lord of the Rings RISK missions or cards, but they made traditional RISK a little more interesting.

Sadly Stefan was dealt a very easy set of them to pull off, and won in about 8 turns (Stefan himself even commented at how easy his were to accomplish together).

I still did rather well (have to get in my boast). I got 3 of my 4 mission completed, and was in striking range of my last one. Had it been a normal kill every other players game then I was scariest at the point of completion holding Africa and South America (I lost SA to Stefan on the last turn due to a strategic modification I had to do to complete a mission, but had it been normal I'd have been untouchable in my stronghold). As it was early in the game, and with Rhonwyn set for a comeback with possibly Andy cashing in I'm not claiming I'd have won. As Brett would say though I was "scary" all game.

So hopefully we can track down Lord of the Rings RISK, and I can convert these guys to the true game...

Posted by traumador at 11:35 AM No comments:

Occurring on what would ultimately prove to be a really stressful day at college (my own fault) we all awoke to a event that seemed to be the biggest deal since sliced bread. That is unless you're from Canada it seems.

After a streak of what we'd kept being told was extremely nice weather the climate finally went wintry last night. In the morning we awoke to the sight of snow. Or at least a tad of it. All up in the hills only, and probably only a cm or two thick.

It has just been funny to see all the locals suddenly go on about how cold it is, and the fact its snowing. The temp dipped down to a whooping -1 last night (around midnight to 2am I'm told), and apart from a nippy wind chill (which I'll admit even made me a tad cold) in the day times is comparable to Canadian fall. 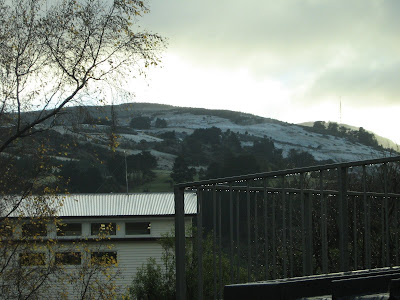 Snow as seen from my window (funny second post in a row based on observation from my window. That should hopefully tell you a lot about the boringness of my blog/life lately. I never leave my desk except to eat, sleep, and go to skool!).
Posted by traumador at 11:17 AM No comments:

So getting home from uni the other day I was surprised to find four police cars stationed 2 at either end of the mainish street I live off. Wondering what was going on, but in no position or mood to thoroughly follow up I continued home. 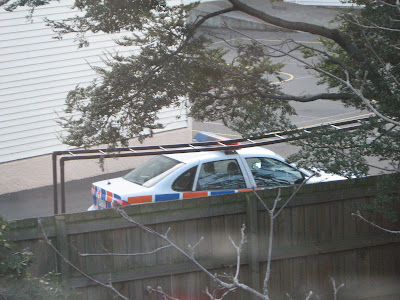 Glancing out my window I was surprised to see yet another police car parked in the school courtyard across the aqueduct from my room!

Meaning that in essence they had us completely surrounded here at Salmond. Or so it seemed. In the end nothing crazy occurred here or anywhere nearby (that we're aware of anyway). Just caused a momentary excitement. 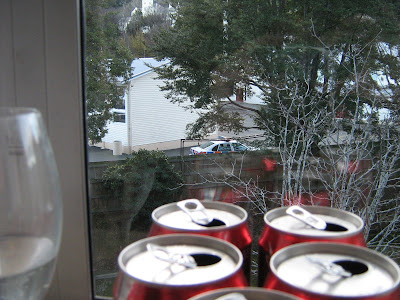 Squad Car as seen from my window.

Posted by traumador at 10:48 AM No comments:

Tyrannosaurus Couldn't Chase a Jeep, but He Didn't Need Too

Biomechanical studies have revealed that Tyrannosaurus Rex probably wasn't a speed demon. In reality the massive Cretaceous killer could probably only reach speeds of up to 25 mph, and had a far slower turn radius then a human... 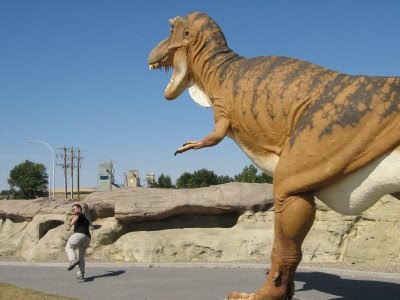 Though some might point to this as evidence that counters Rex as an active predator in that he couldn't chase down prey. What these people fail to recognize is that T-Rex's prey was also as large, and no doubt just as slow (I had a conversation with the Tyrrell's new Dinosaur curator in 06 about how Hadrosaurs were on the weight scale and biomechanical buildup of medium sauropods) ...

That doesn't even take into account former Tyrrell Curator Phil Currie's findings of Tyrannosaurid pack dynamics with nimbler juvenile animals (who are built along the lines of the Tyrannosaurids close relatives the speedster Ornithimimids) as part of a family hunting strategy in which the fast youngsters could run into prey herds dividing and trafficking dinner to the adult Rexs (with the strongest bite force of any known animal) who'd do the killing...

Just as in this posts picture I'd still run (in terrified glee) if I saw a Rex!
Posted by Prehistoric Insanity at 6:14 AM No comments: