So trying to improve my mood (on my art... otherwise I'm mostly okay [though would like to know whether I got the teaching job I'm banking on for the fall... so okay my art stress is tied to other stuff come to think of it])...

Based on my interviews with two (Albertan) Palaeo-botany experts and my reading, Dinosaur Park and Horseshoe Canyon eras Alberta would have been dominated by flowering shrubs (contray to the "flowering plants were still rare" you read in all the popular literature). So shrubs I've started to create.

Trying to figure out how to add some flowers to the leave compliment is currently kicking my head in, but I'll conquer it soon I'm sure.
Posted by Weapon of Mass Imagination at 9:24 PM 1 comment:

Today has been a productive day, despite only getting an hour in on 3D stuff.

I got to meet up with Matt Van Rooijen of Optimistic Painter for a lunch in downtown Hobart. He is an incredibly nice guy, and we talked about all things art and palaeo. Making this even more appreciated was the fact that poor Matt has a very full plate at work. So cheers Matt!

As for my plant, here it is with nice new base. You'll also notice the nice new littered forest floor texture too.

So get over my gigs falling through funk I've decided to go all out on the Palaeo-Environment project once more...
Posted by Weapon of Mass Imagination at 2:17 PM 4 comments:

Just tackling random models under the common topic of Cretaceous Alberta seems to be lifting my artistic depression. I have a fairly solid book premise in mind, and rather than worry about getting gigs from the outside I'm thinking about taking charge of my own palaeo-art destiny! 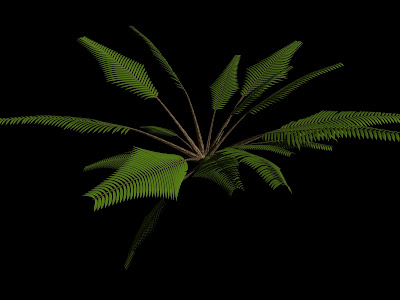 This new project was trying to build a plant on my own without the assist of the Carrara's inbuilt plant generator. The results while promising, do indicate I'll need to approach most plants with a mixed approach. Using the generator to do some of the more tedious base work, and then my own modelling to notch it up.

Looking at the long shot I am pleased. However the leaves texturing is lost... 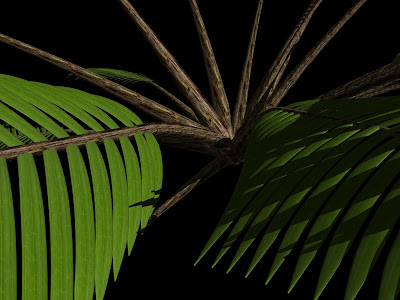 As in this close up (hopefully you can click to enlargen the images) you can see how much work I put into that shader...

Posted by Weapon of Mass Imagination at 8:54 PM No comments:

Rigged and posed the Styracosaurus. Hadn't recieved Albertonychus' feedback on the toe claws (get on that shortly my friend :P), but otherwise I'm actually feeling pretty good about this. 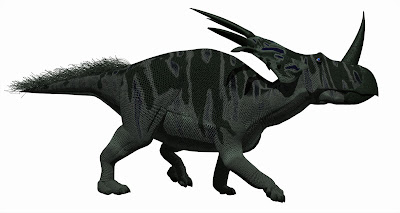 Posted by Weapon of Mass Imagination at 6:11 PM 2 comments:

Spent this afternoon trying to get over my art related funk by plowing through a project.

I ended up settling on the half finished Styracosaurus.

Posted by Weapon of Mass Imagination at 3:52 PM 1 comment:

I've suddenly hit a brick wall on my artistic endeavours this week. Not so much in the output, but more the outlet.

The plan had been for 2011 to be my break-out year into the world of legitimate palaeo-art. I had networked hard, and lined up a good half dozen gigs. It looked like I was going to pull off this feat, which had even just last year looked impossible. Who cared if none of the projects were paying ones, that's why I have a day job. The point was all the countless hours of tinkering and producing would amount to official recognition (and publication). From there I might have been able to make this into paying hobby.

Then over the last two months I have seen those active 6 projects evaporate to a single uncancelled reconstruction. Admittedly one of them I understand, it is the biggest find in Alberta of the new century, hands down. Once this was realized by higher powers it was insisted that money be spent on a pro palaeo-artist. I get that. It still sucks, but that one I can get. I'm not worth the gamble with either the money or that particular press release.

However on four of my other for free gigs, I've been told not to bother as the scientists involved have all been deciding due to "not like 3D reconstructions versus traditional methods"... Despite the fact I was doing this for free, and as far as I can tell they have no replacement artist. They are deciding to have no accompanying image of their new critters, should anyone in the press of blogging world choose to report it, rather than accept a free reconstruction these people could use.

It feels like a kick in between the legs frankly. The take home message I'm getting here is that my stuff is carp. No ands ifs or buts. I suck. Why the BEEP am I even trying...

Mind you there is the last remaining gig. Which is actually a big deal. Once it comes up I'm sure it'll cheer me up. Sadly my client is busy for the remainder of the summer doing field work, so I can't proceed any further till the fall.

This leaves me with nothing to do in a sense. While I can just randomly create things, I find I work best with not only a product in mind, but a use for said product when I'm done. Before this would have been something like Traumador or the ART Evolved gallery, but on this particular day those aren't feeling grand enough (I've been there done that).

Traumador's adventures while fun to do once, have become too much work on both the photography end (none of my human "characters" want to pose for photos after 5 years) and the CG end (the constant increase in quality I strive for has outpaced the quantity Traum required). I was and still am hoping to redefine and relaunch Traumador as a more educational site. For this I was hoping to dabble with Adobe Flash.

Which has just been adding insult to injury. My attempts to animate this simplified version of my new Gorgosaurus have been meeting with nothing but complete disaster!

Up until now I was rather proud of being self taught in all my artistic efforts. However with the rejection of my CG pieces and Flash completely repelling my attempts at using it, have left me feeling perhaps I'm just not very good at anything.

I hope to bounce back. In an effort to figure out all the different ways I could render a 3D image in Carrara for possible use in Flash I took my Gorgo through several filters. 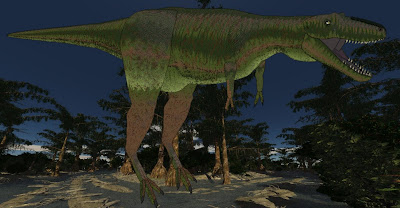 The out comes leave me with some intriguing possibilities for future projects.

I couldn't even animate this basic pencil outline simulate...

The only thing all this motivates me to do, is think about a book...

Anyways I don't think this is a permanent depression. Just a momentary one, that time should heal. Just thought I'd see if anyone else has encountered this overwhelming feeling of uselessness, and if they know a way to defeat it quickly.

I'm going bird watching now to try and get my mind off things for a bit.
Posted by Weapon of Mass Imagination at 10:18 AM 3 comments:

After reading and playing with the lessons in my Adobe Flash book, I am discovering the program is completely inflexible and impractical for anything I want to try outside of the controlled elements of these tutorials.

Seriously? Is it this platform actually this useless that I can't use imported graphics from other programs?

Admittedly my other programs are not Adobe ones as I can't afford Creative Suite, but I'm using their formats. Still nothing.

My other major frustration is that between the documentation of my book and the Help files there are serious gaps in how to do things.

Does anyone know where and how one accesses the "HUD"?!? It is the key to "optimizing" an imported Bitmap, and I can't find the HUD nor successfully optimize any graphics...

Grrrrrrr
Posted by Weapon of Mass Imagination at 10:00 PM 1 comment: