In between preparations for the big day I've managed to sneak in the odd bit of
work on my Gorgosaurus. 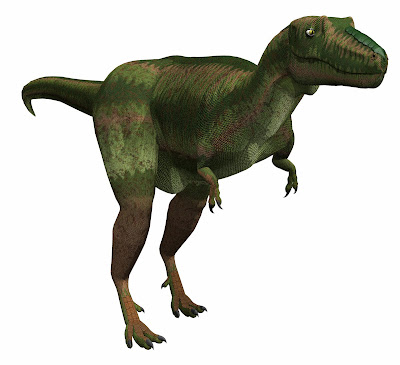 So here is the Mark 6 status on this fella. The latest improvement (besides adjustments of the lips and limb to digit connections) have been the incorporation of the feet and hand scales into the texture maps themselves. Before this I'd always just lined the fingers and toes with scale objects. While sort of achieving the effect to an extent, the objects always looked for forced and they never rigged well.

I think he is pretty the awesome. 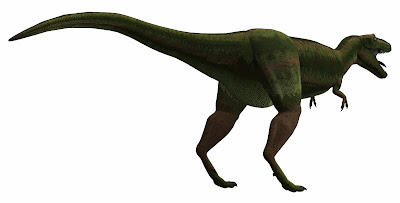 He definitely has junk in the trunk! 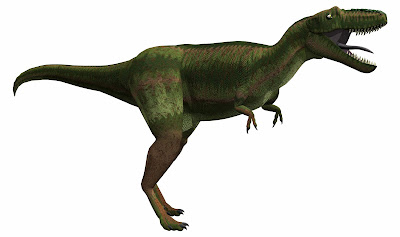 Thoughts or input?
Posted by Weapon of Mass Imagination at 10:52 AM 4 comments:

New Head, Lips and All.

After a long morning of errands I earned a quality lazy afternoon watching two hockey games. For the record if the teams logo is finned I'm cheering for them (aka the Cauncks and the Sharks, in that order of priority).

While enjoying my hockey I am casually working on my various Dinosaur projects. Today saw the Gorgosaurus get a lot of TLC (especially during the Bruins/Flyers... couldn't care less as to who wins).

I'm very pleased with how the shader is turning out. Just the digits to go now.

He might look a little funny, but that's cause I'm going with a new trend in Theropod reconstruction after a brief conversation with Phil Currie. That being lips. In his opinion, supported by lip ridges on the skulls, Theropods needed to cover their teeth to keep them from drying out and cracking.

So I put them on this guy (I had put them on Larry, but he hadn't really appeared on Traumador since), and it just looks odd. This is more due to tradition.

Its not that he is packing. Check out those pearly whites. 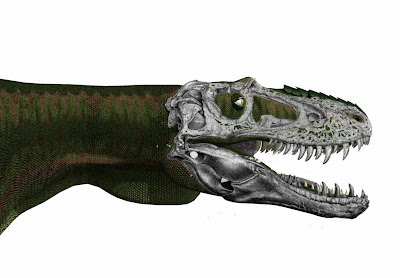 I was surprised how much I STILL had fix this guys head. Considering how much work I put into the Lillian model a year ago I was saddened to see how many more modifications I had to match this Sloan version of the skull.

So approaching the end of this revision of my Albertosaurine model. Hopefully this week my RAM upgrade will be showing up, and I can resume trying to learn to Vertex and Displacement modelling.

Any thoughts?
Posted by Weapon of Mass Imagination at 10:59 AM 2 comments:

While my efforts to define my 3D Dinosaurs style into a more realistic look have been all over the place, I think I've finally hit upon a winning look for my Gorgosaurus, which you can see above.

Thoughts or feedback (keeping in mind I have of course only textured the body and leg... the remainders of Lillian's texture will be reworked shortly).
Posted by Weapon of Mass Imagination at 1:59 AM No comments: