Despite being a huge Mosasaur buff, I've never actually completed a model of one besides Taniwhasaurus/Tylosaurus. Not to say I haven't built multiple incarnations of that critter (I think I'm currently on the 6th or 7th version of it since I started tinkering with it in 2006).

Today I managed to officially change that with the completion of a Globidens.
My only issue here is I've been modelling with no idea of overall skeletal proportions in this animal. The only papers I have go over skull proportions, and these I think I've nailed. However I have no idea how all the other bits and pieces sized up together. So this is my approximation off of gut feeling... Anyone with a better knowledge set I'd welcome input! 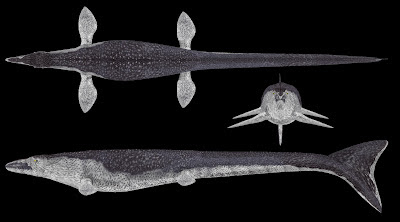 So here he is. So while I try to track down proportional data, I also need to finish off the mouth and teeth...

Comments?
Posted by traumador at 9:44 PM No comments:

I just love building underwater stuff, so the Dan Varner gallery has given me a real excuse to really cut loose. That and it lets me build up my model population and resources for a few New Zealand palaeo projects I have in mind (namely books and education articles).

So while I tinker away on the Kelp scene (which is giving me no end of rendering malfunctions), I've got a couple other scenes on the go. Today saw this new one. 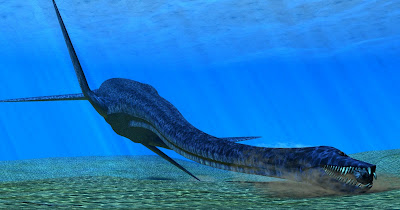 One is now I have an Elasmosaurid model. Their heads are really weird I have to say, and I need to tweak it a bit more. Otherwise he is functional.

This scene is not what those in the know might think. While yes we know that Elasmosaurs would have scooped through the ocean floor for rocks for their stomach, there are some new finds in Australia that showed in addition to fish and squid, some Elasmos were eating bottom dwelling snails and clams! So here is my scene.

I'm also going to add a Globidens (aka clam eating) Mosasaur in here too, as it is believed competition from Mosasaur drove Elasmosaurs to be such generalist feeders.

Posted by traumador at 9:56 PM No comments:

Graduating to the next level

﻿
While I still haven't formally heard from Dr. Fordyce about the publication of his Squalodon (and honestly if he still wants me to do the art for it), I am satisfied that my 2.5 year re approach is now up to professional standards.

In fact of ANY piece I've done I think this one could be a contender among professional palaeo-art works.﻿ Not that I'm saying it is the greatest piece of all time, but just that this could be entered into that kind of level and not be outright rejected... 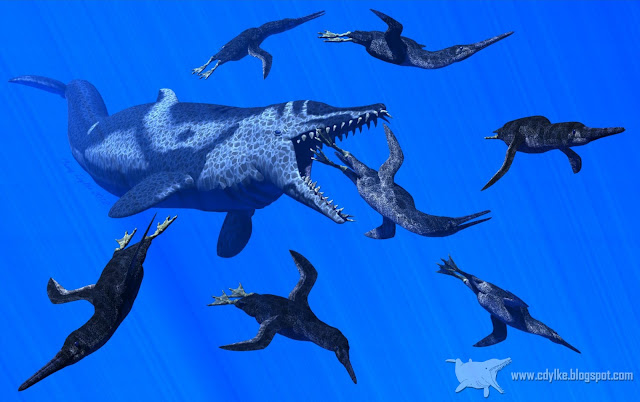 Here she is the 2012 version of the Squalodon. A rather energy packed piece, grabbing the final moment before a poor Oligocene penguin meets its fate. I'm very proud of the almost haphazard nature of the composition. It's like I was diving 25 million years ago and managed to snap this with my camera in the heat of the moment (which I've always wanted to get my art to look like). 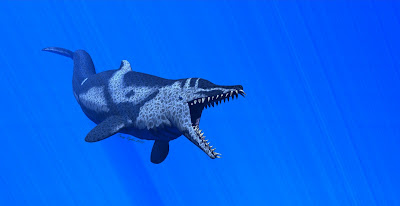 This was my first test render of the new underwater lighting rig I'd built, and I knew I'd accidentally found my winning pose and rough composition right off the bat. Apart from the Squalie looking like it's gone crazy attacking thin water, I could have called this a final (thus why I'm showing it with the final piece).﻿

For a point of comparison here is the 2009 "final" I showed Dr. Fordyce, and I can see why he was not 100% enthused about it at the time. Yet good to my word I told him this was just a concept piece, and that given some more time I could fire off something way better...

I think I've delivered on that promise.

Thoughts comments? The penguins are the only thing that might need tweaking, but I think they almost work (I am aware they're not AS strong as the whale). What do you think?

A big thank you to Dave and Matt for pushing me on my lighting. This piece wouldn't have materialized without that constant inspiration to improve!
Posted by traumador at 9:32 PM No comments:

My best hope of publication?

I returned to work little too soon after a cold or flu last week (I hate taking sick days... a bad hold over from my subbing career), and have now found myself without my voice this weekend. I'm not sure I've given it sufficient time off as its, but I'm back to teaching today (using my extremely loud lifeguard whistle as a noisy classroom deterent!).
The one spot of good news is I had a good excuse to sit down and give some of my art some TLC. Given that Dr. Fordyce just described a new penguin this week, I was hoping to give him some new artwork on the Squalodon to maybe encourage his next research project (no I don't actually think my art is anywhere near the quality or importance to dictate the good doctor's efforts :P Though should he decide to tackle the Shark Toothed Dolphin I do want to have something legit to bring to the table). 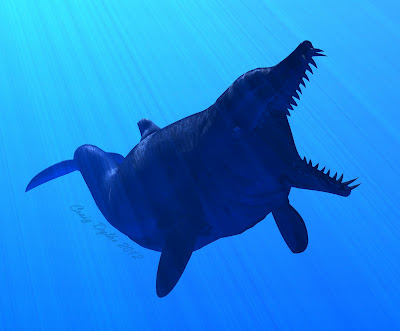 This was an accident I got while randomly spinning the camera around in my new underwater lighting rig. It looked to awesome not to formally render... Yet it surprises me to say the fully lit "normal" angle version is better than this, and may well be my best render ever. You'll have wait a day or two while I iron out the Squalies prey before posting it.
Posted by traumador at 10:46 AM 1 comment: