The conquest of Feathers...

So I've been working on 3D feathers for a year. Yeah you heard me. A year. You finally get to see the results now.

The exciting news is this part of a build up to a relaunch of The Tyrannosaur Chronicles. The video direction has hit crippling schedule conflicts (much like the Chronicles). The bad news is you might still have to wait a bit for Traumador's return. I'm taking the time to build up to an awesome return.

So in the near but undefined future (realistically probably late May) expect more Traum, New Zealand, Vivus-critters, and mythology. Plus several other surprises. So stay tuned. 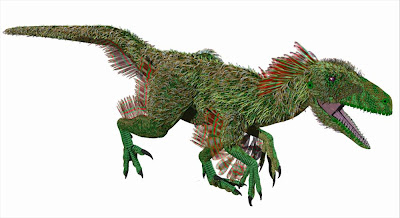 These are my feathers, as of my 2010 revisit in March.

A little better than my old feathers. However verging on shag carpet. At the time they were better as I put them on in patches and could better control their orientation. Yet they still don't quite look realistic.

I re-approached the project this month. The results have been slightly spectacular.
This is feather kung-fu in comparison to my previous attempts.
Any thoughts from out there?
Posted by Weapon of Mass Imagination at 1:04 PM 12 comments:

Managed to put in a day's work on a Terror Bird for the upcoming ART Evolved gallery.

While the model itself isn't my best work, you may note the nice new feathers. Despite these giving me a few slight issues, they are no where near as infuriating as they were two years ago!

I have developed a rather nice, simple, but yet devastatingly efficient way of feathering a critter without MOST of the fuss (other than orienting the feathers on the model). 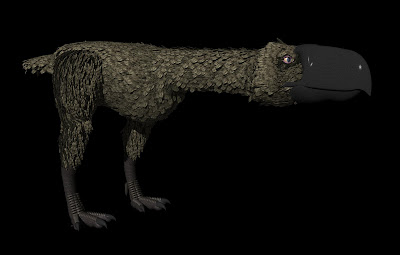 Which means I've stumbled upon the next Mark in my 3D construction techniques. Ta-da we have Mark 6!
Meaning I have to upgrade all my previous feathering rigs (which is fine. I have plans for them when I finally manage to get back to Traumador... oh how I wish I had a machine that could produce extra time!)
Posted by Weapon of Mass Imagination at 5:04 PM 2 comments: