Probably the closest I've had to an addiction problem (which wasn't CLOSE to a problem at all) was my 4 year stint as a full time comic geek. I gave up my "geek cigarettes" in time for the move to New Zealand, and apart from 4 issues of Warren Ellis Ultimate Human and 1 issue (of 3) of the horrible Serenity sequel series Better Days, I haven't bought any since.

On this latest trip to Canada (this past August) one my big to do things was to clear as much of my stuff out of the parents' place as possible. As my comic collection took up a LOT of room it sadly hit the cutting block.

Naturally I was not pleased at the prospect or the inevitable outcome. Fortunately I found a great two prong approach to make this sacrifice a little less painful. It turns out my comic collection (and I'm sure most other people's) can be broken down into two categories:

Comics of experimentation or short term interest or those that are keepers. Turns out about a quarter of my comics were those that I thought I'd try out and pick up anywhere between 1 to 6 issues. Than there were series I bought at the time due to moderate interest, but now I could care less for. All these books, nearly 1/2 of what I was holding on to, went to a used book shop and fetched me a mighty $25. So if you're holding onto all your comics as your retirement fund maybe time for a different plan.

As for the books I really enjoyed and still re-read I didn't wish to get rid of them so heavy handily. The night before I was going to lug the last half of my comics to the used book store I was fortunate enough to have a coffee with a friend who hearing I had the first 60 issues of Ultimate X-Men insisted she'd take them. I made the terms be she take ALL my keeper comics. This was better solution for me. It meant my collection would be definitely enjoyed more, won't sit on a self collecting dust in the used book store, or worst of all just be thrown out.

At the same time this left me comic-less (minus my trade paper backs). Till my friend Mike hooked me up with digital backups. Now I point out here that if I were to have digital copies of books I didn't owe this would be piracy, but 90% of the stuff on my removable harddrive are issues I legitimately bought. The remaining 10% are those issues of things I couldn't track down (mostly old back issues).

So I have comics again! For the first time in nearly two years! I'm loving it frankly. Even if on the computer their a little more tricky to read.

Figured I'd run you through a few of my favourite titles.

Warren Ellis' Planetary the series that started me reading comics. The funny thing was back than I didn't get the referencing to other comics that this series was based on. It was just a compelling conspiracy story. The other funny part is this series has been running for nearly a decade with a whooping 25 issues... The last issue of the whole series has supposed to be coming out my whole time in New Zealand. Meaning the instant I move back to Canada the last issue will finally come out! Hopefully I move back than...

Frank Millar's The Ultimates (avoid Jeph Loeb's current run like the plague!) the title that got me buying comics in the first place. The first 6 issues of both series are among the most realistic and believable superheroes in comic history. Hard to believe their based on the regular main stream Marvel Avengers, one of my least favourite groups of comic characters ever.

The Birds of Prey, specifically the Gail Simone run but I really like Chuck Dixon's as well, was the ongoing book I looked forward too more than any other. Well written female characters are rare in comics so this book was a treat, and to be written by a good female writer made it all the better! I also loved that the main hero of the book is superhero of information who doesn't actually fight bad guys in person.

One of the biggest surprises when I really delved in comics. Sean Mckeever's Sentinel. On paper it sounds like a rehash of the Iron Giant. A geeky kid finds a broken Sentinel (X-Men killing robot) fixes it to fill in the void of his life. I ignored it till Mike insisted I pick it up.

Holy crow! It was one of the most character driven books I've read. The Sentinel turns out to be "fun" substitute for a gun in a kid friendly but yet dark examination of school shootings. Of course the main character doesn't go that route, and after the first 6 issues the book delves into all sorts of other teenage issues. Trust me its is worth picking up the two nice little complete Marvel published digests of this series!

Since I'm on the topic of comics I can't suggest stuff without a cross-over. Typically these involve a central cross over book with tie ins in the other normal books. My pick for best cross over doesn't have the tie ins (both fortunately and sadly). The Ultimate Galactus Trilogy by Warren Ellis. Made up of 3 "different" series that all lead into each other as the Ultimate world learns of the most dangerous threat to the planet it'll ever face!

Though the first story Nightmare is quite forgettable (other than the last few pages which set up the main point of the series) Secret and Extinction are amazing. Not only for the pacing and delivery of the story, but the direct tie-in and referencing of established Ultimate continuity (especially Ultimate FF). Something modern Ultimate books don't do anymore.

Since all the comics I'm suggesting are of the new millennium I figured I toss in a retro comic. Classic Suicide Squad by John Ostrander is more fun than you can shake a Manhunter at. The premise being that with the huge cost of containing super villains in prison the US government decides to get some worth out of the investment, and starts bribing or forcing these captured super people into the most dangerous of missions for the state. The book lives up to its name. Lots of team members die, and thus its a real diverse book as the line up changes arch to arch. Yet at the same time the regulars who manage to survive (even just for a few storylines) became some of DC's best villains in the pages of this book.

So it's good to have comics again. I do sort of miss not getting new ones, but most of my favourite aforementioned books are either gone or headed up by different writers (in the case of The Ultimates, Jeph Loeb has managed to turn my favourite book into an outright joke!) so I'm safe from getting back into the habit anytime soon.

Yeah well its nearly two months since this event happened, but I thought I'd throw up the pics from it finally.
So at the end of July the hall held its annual Ball. For those of you who don't remember last year's was where me and Rhonwyn first met. So this occasion had a bit of significance. Even if it didn't coincide with our one year anniversary at all (last year's was in May as opposed to this year's in late July). 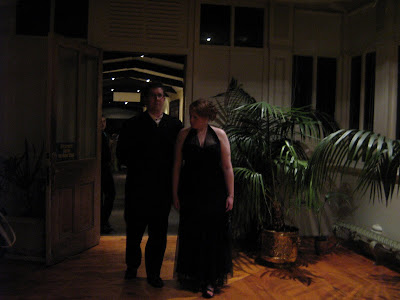 One of the few pictures of me in my rented suit (on my camera anyways). It was an India style suit, and I have to say when I get around to buying a new suit it'll be one like this. I very much liked it. 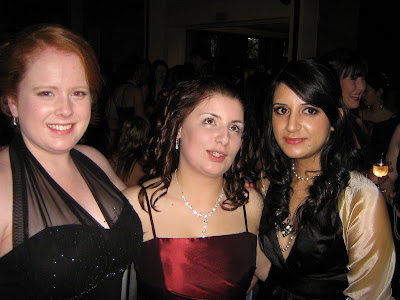 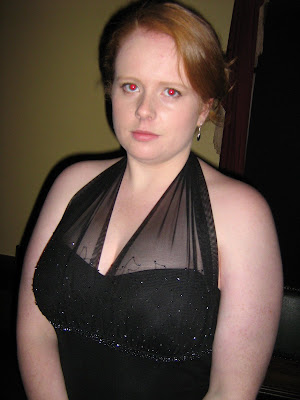 Of course the loveliest of all was of course this little lady... though I should go and photoshop out the red eye. Just too much on the go these days.