Life carries on. I can't believe we've been in Hong Kong a month already... On the one hand time has been flying by, and it doesn't feel like a month. Yet so much has been happening I could be convinced it has been a year!


We still don't have proper Internet at home :( A typhoon (aka hurricane) hit literally on the day we moved. So yes I have moved into an apartment in the middle of a hurricane. How many people can boast that?!? (In fairness we cheated as our apartment was only a couple blocks from the hotel, and it was the lowest of three levels of typhoon [confusing referred to as levels 8, 9, and 10]).

I'm plugging away on my new Traumador project casually, and the results are piling up when I sit back to take a talley. I do need to return to my lighting test soom, as the ART Evolved Forest gallery will be sneaking up at the end of the month...

CG Traumador got a new colour scheme. Everyone (on the net and in person) rebelled against my trying to turn him green. So here is the Olive green Traum, with the base colour lifted directly off a photograph.

I do have to admit it does much more invoke Traumador this way.

The project I'm working on will have Traumador with an ensemble cast (much like I'd planned for the Chronicles had they not become too time consuming) of Dinosaurs. However in examining my cast of Traumador character I realized they were mostly from Alberta and Australia. So I'm diversifying and internationalizing Traum's "team" a bit more. 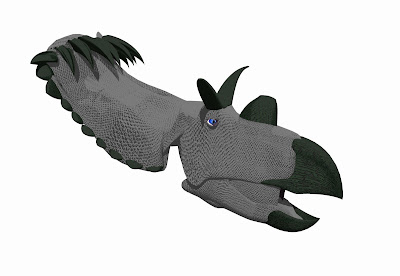 First up I decided Norman needed to go. Not that I didn't like the Tyrannosaur/ceratopsian friendship, just Centrosaurs will likely be the focus of my first story, so Traum being friends with one won't work as well. That and I should probably have some Americans on my "force". Can't have all Canadians (sadly), so I decided to grab my favourite clearly American ceratopsian. Being this guy here.

Hopefully the Dino experts out there know immediately who this is... Have to say Kosmoceratops was odd to build. Mostly just because it didn't feel like I was building a Chasmosaurine. I started on a Triceratops back in NZ and through it I learned Chasmo frills work a lot different than Centros. Yet this Kosmoceratops apart from slightly different proportions comes together like a Centrosaurine.

Hope he looks okay. As for the name, I could just stick with Norman, or I could go for the obvious new name of Cosmos. I'm starting to gravitate towards Plato, but that is just me.

Posted by Weapon of Mass Imagination at 9:59 AM

Kosmoceratops is my new favorite ceratopsid as well, but I liked Norman (and Norman A Kosmoceratops just doesn't have the same ring). I have no misgivings if such a retcon can be pulled off effectively though (which, at the moment, I'm having trouble imagining, but I'm sure you have something in mind).

Thinking again, maybe Norman could be Put On A Bus (http://tvtropes.org/pmwiki/pmwiki.php/Main/PutOnABus) instead if a retcon (and therefore possible discontinuity) is not necessary.