So within 2 hours of moving to Hong Kong I discovered I had an amusing neighbor. In the mall directly under my hotel room (and a mere block and a half from my apartment) is this pudgy little guy... 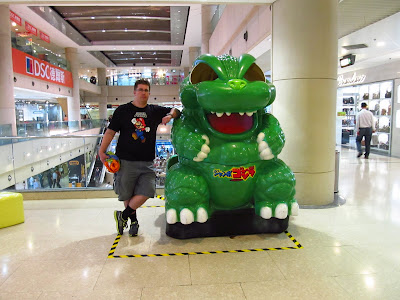 Don't recognize him. Well believe it or not this reptilan impersonating Budda is supposed to be Godzilla.

Though you can't see it from this angle, he is a kid's ride. They hope inside him and for a few dollars play some sort of video game. I've never seen the game (in fact this picture was snapped during one of the ONLY times we've ever seen him unoccupied by children). Is it wrong for me to want to come by sometime late at night and try it? :P

I don't know why but they are really into this silly cartoonized version of the king of monsters... 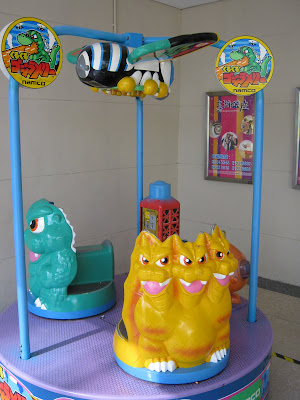 Yet he is everywhere! 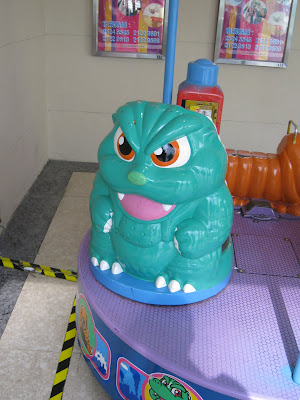 I would have taken more detailed photos of everything, for example the mothra larva behind, but some kids ran in and jumped on before I could finish my pictures. 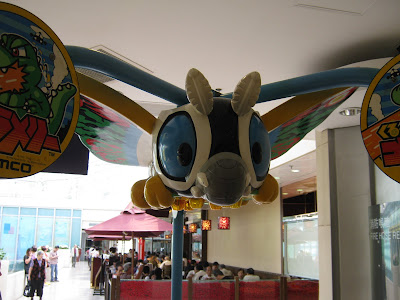 Note this is probably the only version of Mothra I like! He works as a cartoon. Definately far better than Ghidorah does anyways!
Posted by Weapon of Mass Imagination at 12:45 PM