After a very informative discussion with fellow ART Evolved member David Maas I've just launched a major attack on one of my biggest 3D problems. While I can't claim total victory, with David's incredibly useful advice I'm in position to finish off my foe.


Even after upgrading my computer's RAM, this task has been killing my machine and my efforts. Now with a brilliant suggestion from David, I just rendered this forest in just under 15 minutes (my normal forests, IF they rendered, took well over an hour). 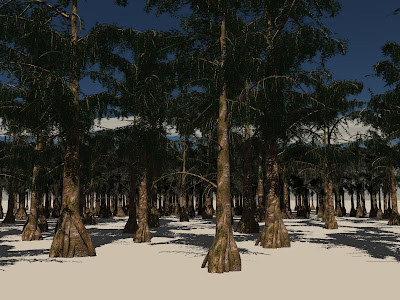 While it is very rough around the edges, this is of course just a demonstration of the concept.

What is the concept? 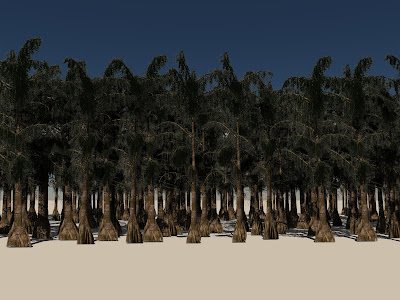 The majority of the trees you saw a moment ago were not actually proper 3D models, but rather a CG equivalent of a 2D cardboard cut out. To make them, I rendered the true tree model as a 2D image, than applied it on a plane object, and amped up the alpha setting (which a non-3D person would think of as transparency... but don't get me going on what transparency actually does in 3D...).

Apart from some issues I'm having with the 2D image (it has a white outline due to slight greys around the edges) this looks perfect. I just need to seek out a solution in my graphic editing software (not that that won't be a headache).

Posted by Weapon of Mass Imagination at 5:50 PM

The flats merge really well with the 3D trees.

Keep it up Craig!

Try rendering with multiplied antialiasing... that should get rid of the halo.
IF you don't have that setting, render against a green background - so that the aliased edges are forced to take a color similar to the trees...