Here comes round 2 of my exploration of ambient lighting. This time I'm taking a stab at the colouration of the filter on the ambient light.

Like before I am only exploring the effect of one variable out of dozens possible in lighting settings and rigs. For my full setup methodology read at the bottom (I put it to the bottom as it is a repeat of my previous post, and I don't wish to bore those who have read it before).

For this test I took my ambient light and tried 5 different colour filters on its light. These were extreme warm (a strong bright yellow), warm (near white yellow), neutral (white), cool (near white blue), and extreme cool (strong bright blue). All these were set at 20% strength. If you want to see the effect of changing the lighting strength check out my last post.

Here are the results. I will be doing some commentary on these soon once I've had a chance to fully understand what I've discovered :P Again stumble through experimentation, we take conclusions if and when they pop up. 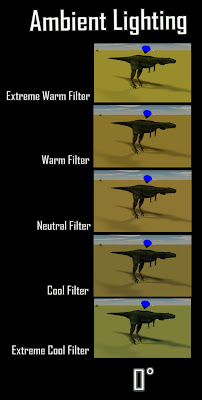 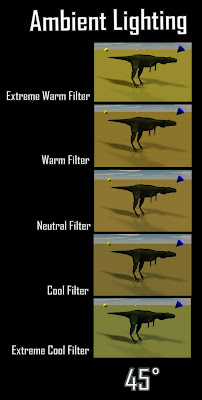 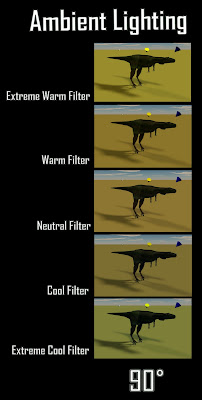 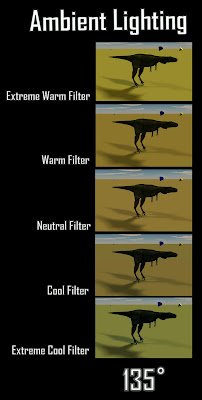 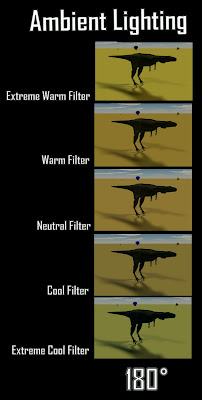 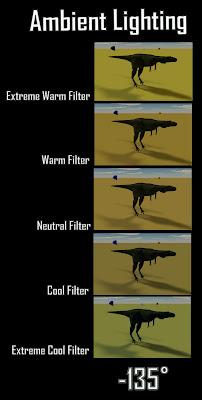 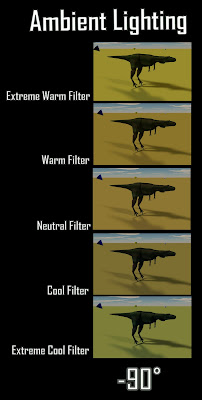 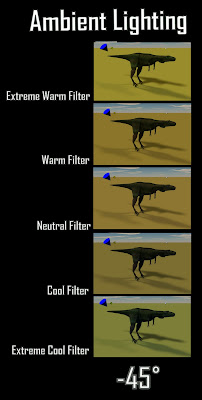 So here is my methodology. I'd suggest that you follow my procedure very closely to reproduce any of the results you see here. I'm finding lighting is composed of dozens of variables, and so like a good science experiment I'm isolating each set one at a time to see what they do. So please bare with me as over the next few days (possibly weeks, or worse case scenario months) as I attack each variable on its own.

I'm testing a Three-point lighting system. To reverse engineer this setup you're going to need a circular array of three lights (whether they be spotlight, bulb, or distant is up to you... though I've personally gone with distant). These lights should be aligned 120 degrees apart from one another, and all pointing towards the centre of the circle. Mine were pointing at the ground from the sky at a 45 degree angle (I will be running a test/tutorial on changing all the angles and positions mentioned here in later experiments).

Once you're lights are setup, each will have their own settings. These include the key light which will have the highest lighting and shadowing rating (in the case of below both these settings were 100%), and thus be the main light source of the scene. Next is the fill light that will have a halved value on lighting intensity, but in my case a normal shadow strength. Lastly the backlight will be the weakest with a 1/3 to 1/4 strength in lighting and again normal shadow. For this specific tutorial I've arranged these in clockwise order of one another.

Lighting colour (critical to some of my future tests) had the Key light with a cooler colour (a near white blue in this case), the fill with a warmer (near white yellow), and backlight with a neutral (near white gray).

I grouped this three-point lighting system which in effect (with centre point truly in the centre) turned these lights into an imaginary circle (basically bombarding my scene with light from all directions, but of varying power and strengths). For each test of my lighting I rotated this group 45 degrees per render. This way I could see what the three-point lighting was doing from roughly every possible position of setup.
Posted by Weapon of Mass Imagination at 4:43 PM