Rounding out the Shale

Another weekend came and went. Got quite a bit done during it.

First and foremost I now have 2 pieces officially done for the upcoming ART Evolved gallery. I am very happy with the final version of the claw reef, and I think it matches and out does Karoo Sunset as my pinnacle artwork. 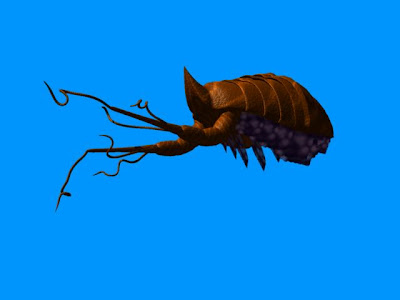 In order to finish off the claw reef I needed to increase the ecosystem diversity with a few new Burgess Shale critters. Of these, the one I'd most wanted to make in 3D forever has been Leanchoilia. This is my current model, and it does the job. I'm not happy with the shell at all (though through it I have discovered an incredibly powerful new method of making segmented shells!) and will probably fix it at some point.

The tentacles on the other hand are a technical triumph, if I say so myself. They are each made of 54 individual segments that have been linked and had their individual rotation parameters defined. Meaning they function as one piece, but when I move the ends the whole thing easily twists and curls like a real tentacle. This sadly was a lot of work as I had to painstakingly set the parameters of each individual piece. I hope the new version of Carrara features a batch rotation setting where you can apply the same restraints on multiple objects at once.

I'm not finished with my Burgess construction effort. I'm aiming to build at least 3-4 more classic and obscure critters to occupy my remaining 3 unfinished pieces.

The other finished piece was an easy redo of my classic silhouetted Anomalocaris, only with the new version model. 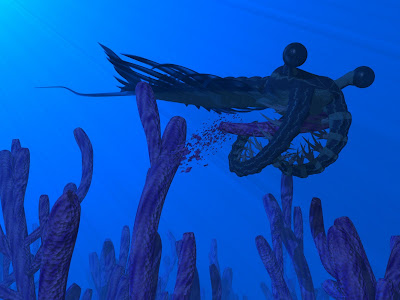 A possible 6th wild card piece is a more tweaked version of this, my sponge eating Anomalocaris. It was inspired by a conversation I had with a world expert on Trilobites a few years ago. This expert challenged the concept of the super predator Anomalocaris due to a lack of track fossil half eaten Trilobites, which I've seen claimed as actually existing but have yet to see for myself (the expert hadn't seen them either, which might be telling), and they proposed Anomals instead ate the equally giant for their time sponges. I don't really buy into this argument, as again I've heard there are trace fossils, and the mainstream is content with the hunter model. Still it got me thinking and researching, so I may present it as a testement to the good of contstantly testing and rethinking conventional wisedom.
We'll see if I get this one done in time. 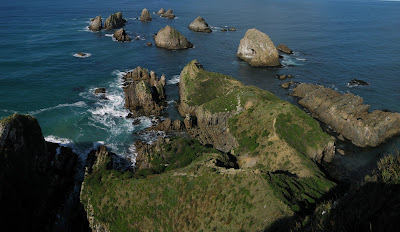 Went on another field trip as well this weekend. This time not overly far from Dunedin, just an hour south, out to Nugget Point. I'd been to this place twice before, but never bothered to wander out to the lighthouse at the end. Wish I had (though at least I did it this time!), as this is the view waiting for me there...

The rock circle in the water has been in a movie or two I'm sure, but I can't put my finger on which (other then probably Jackson's King Kong). Anyone out there recognize them?
Posted by Weapon of Mass Imagination at 7:31 AM

Those tentacles are impressive! Good luck with getting your work done for the gallery!


Although, how large was a Anomalocaris, exactly? Again, I'm not familiar with the Cambrian fauna. Sorry. :(

If I remember correctly, it was a meter or so long.

These are looking great. You really are having a breakthrough period here.

Albertonykus is right, I noticed that today while googling info for a post on the 100 years of that great Burgess Shale site.