Out with the old, and in with the new

So work shows no sign of letting up... I say this like it is a bad thing... no it is a good thing. At least for me ;P

The outbreak of the flu around town (some swine, mostly normal if you ask me!) and the wear and tear of half a year of skool has finally got teachers dropping from their classrooms left, right, centre! Great news for a professional vulture like me! (though I don't actually wish "ill" upon anyone,I do wish ill upon them if you follow me LOL).

This week has proved very odd and memorable in my substitute career so far. The skools I've been showing up to have all been ubber connected to my history in this town!

Monday saw me in THE classroom of the woman who laid me off from the holiday program. Then yesterday I was in the first room I ever properly taught in (as a student teacher). Today had me in THE last room I was a student teacher in. Nothing earth shattering, but it has been odd going from one connection to another. So for the next two days I anticipate I'll be in the rooms of my two teaching friends (which is impossible as Friday is booked in one of my regular rooms).

The bad side of all this teaching is that it drains me of my energy reserves. So despite having longish evenings, I'm not quite getting as much done as I should. On the good side though I have money again... Like as in beyond what is needed to survive (I haven't been THAT poor!). 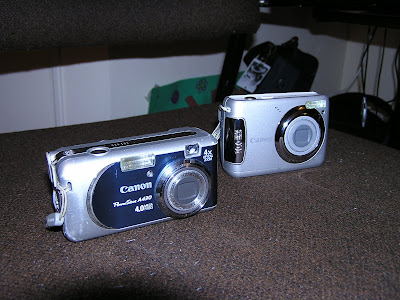 With this new excess I broke down this weekend (in face a big electronics sale at all the stores in town) and bought a replacement camera! It turns out that Canon has carried on the lineage that my old dead A430 (on the left) was a part of, and I picked up the latest top of the line A480 (on the right).

I am very pleased with the A480 already as it performs similarly to my old A430, but hosts a LOT more control. The A430 was simply a point and click camera with only a few preset modes to give you a touch of control on the photos, but it wasn't much. In addition to about twice the preset controls (including an aquarium one... can't wait to try it out!!!) the A480 also includes exposure and ISO controls.

I'm not a big fan of the ISO control so far, but I'm not used to having to worry about the ISO. Hopefully once I'm used to it I'll be able to say good things about it (besides it is training for the nice camera I intend to buy in the next year).

Having exposure control however is amazing, and has made the transition from old to new pleasant (compared to the traditional bitter with all the little differences bugging you). I have found all the pictures I take end up being of a reduced exposure, between -0.5 and -1, leading me to wonder why cameras don't just automatically reduce the exposure. Oh well.

My new acquisition was timed perfectly with this weekend's field trip down to the Catlins. The Catlins are due south of Dunedin along the entire bottom southeast coast of New Zealand. Among highlights of the area are several spectacular forests.

Did I mention the forests?

Waterfalls. Four of them, though in my opinion only 2 are really worth the stops.

Finally a world class petrified forest, which this is NOT a picture of! I have tons of photos of the forest already, and it is the furthest location from Dunedin (at about 2.5 hours one way) so we didn't make it there this weekend. For this trip we just stuck to the 2 waterfalls and the tunnel.
Fittingly everyone on the trip had a new (to them anyways) camera. So we'd park the car and all immediately break into hiking with a camera in front of our faces!
I wonder why my old camera died... I've only had the new one 5 days, and it has already taken 652 photos! Though in my defense these days being so addicted to panoramaing photos I need to take at least 2-3 pictures of any subject or spot (for the bigger impressive panoramas it can go as high as 12!).
The increase in megapixels from the A430 to the A480 has required me to go on a serious photo cleanup. Out of the 22000ish photos I had a week ago, I have managed to cull this down to 1900 so far, and am hoping to get it down to 1500 by the end of the week. Fortunately for me this is a good task for when I'm brain dead after teaching.
Posted by Weapon of Mass Imagination at 1:27 PM

Yeah, the irony of being a substitute teacher is that you benefit from other people's "ill." It stinks, but, oh well, that's life eh, Craig? :P

I'm glad you got your hobby back and I DO like the replacement camera! It brings a whole new view to New Zealand, if you know what I mean. LOL!


Oh, and before I post this comment and leave, I think I ought to tell you that the school year has just started for me! I am in 11th Grade this year. I'm still in High School, but it's ONLY TWO more years of it before College and on to Vertebrate Paleontology! :D I'm so excited! My PaleoQuest is Almost complete! Yeah!

2.5 hours from here I still have houses and houses.
:S