Today was a huge artistic day. Not so much for myself (though I did my share as you'll see), but rather for my good friend Peter Bond. Today was the day he dedicated solely to creating his Anomalocaridid for ART Evolved's next gallery at the end of the month. What made this epic creative undertaking cooler was he live blogged the whole thing! Check it out here...
As I ended up having no work today (oh well, I'm booked the rest of the week now!) I was able to join him on his artistic crusade a few hours into it, and got the exclusive privilege of chatting with him on skype for huge chunks of his journey. 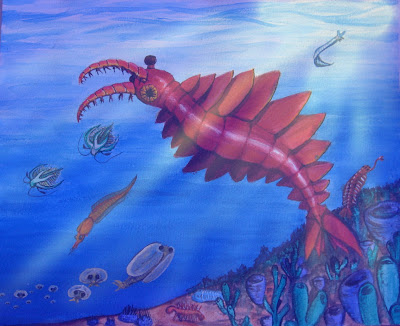 He painted a fantastic piece 9-10 hours in, but hit a brick wall. How to create shafts of light through the water. Was he to paint them? Or photoshop them?

I suggested that Peter do it on the computer, and thus if he screwed up the painting would be safe. Peter wasn't sure how to proceed from here though, and in my frustration to attempt to explain to him how I'd do it, I grabbed the painting off his blog and played with it on my own machine to throw together this demo (as my procedure was really easy... but that was in my photoshop knock off... turns out to be a lot harder to do in real photoshop!).

This is what I ended up with. I seriously created this in about 1 minute total (with 30-40 second spent on the blue filter layer and only 20-30 seconds creating the light shafts). Lady R burst out laughing when she saw the effect I'd made on the Pikaia. I'd just picked that corner as the light source, I hadn't realized I'd make a gODly aura around the ancestor of all vertebrates... This was not my intention, but a funny flub worth mentioning. 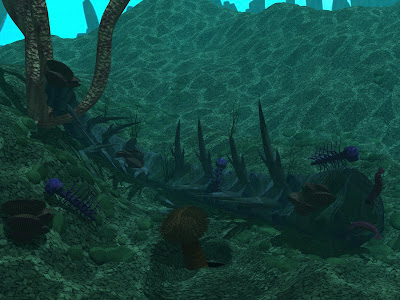 Whilst talking to Peter, I found his creativity to be inspiring. So I jumped into creating my really complicated and involved piece for the gallery (I'm planning on a few entries). This was my shed Anomalocaris claw reef.

This is how far I got. Probably about 40% done.

The concept is based on the fact that 95% of Anomalocaris fossils we find are of their shed claws. In their environment most of these claws weren't being fossilized, so they must have served some sort of useful ecological purpose (otherwise early life would have been smothered to extinction in these claws!). I envision them serving as a good forming point for a new patches of reef. Thus we get a bit of biologic irony, the killing apprentice of nature's first super predator becoming a key life facilitator to its very prey...

Posted by Weapon of Mass Imagination at 5:49 PM

Haha...'Godly Aura"...around the Pikaia! That was funny, dude!! They're both looking pretty good so far (Yours and Peter's, I mean. ;))! Can't wait to see the finished product!! :)


BTW, is the Pikaia THE ancestor of all vertebrates? Sorry, my knowledge of the Cambrian is a bit dark. :P

It isn't a good idea to label any fossil as the ancestor of anything. (Think about it: most fossils don't fossilize, and only one species of organism at any given time is the ancestor of, for example humans, so the likelihood of it fossilizing is going to be really, really low.) At most, we can say Pikaia tells us a thing or two about what the ancestor of all vertebrates was like, but we can't be sure if it WAS the ancestor.

Great artworks by the way, and interesting theory about Anomalocaris' claws. I'm afraid my knowledge on the Cambrian isn't too sophisticated, either, so I can't give much input.

I liked that light effect. In some pictures you can see that throughout the image.