Keeping Out of Trouble

One of my favourite sayings, especially when applied to myself, has always been "keeping out of trouble". As a slight sufferer of ADD I, if left otherwise unoccupied, can get myself into the odd spot of trouble.
Lately having found myself poor, due to a lack of work (though as of this new term this is a problem of the past...) and my efforts to save my worthless kiwi $s for the move back up to Canada next year, I've become acutely aware of how much money keeping occupied can take.
The remedy I've come up with only gets around the expense issues after a fashion (as everything costs something!). Every weekend I've been jumping into the car and driving around both town and south east New Zealand in search of fun and interesting places to photograph.
I justify this as both my last stab at enjoying/taking advantage of my time in New Zealand, and that photograph is free (sadly the cost of fuel and the associated guilt of environmental impact remove this).
However fans of Traumador shall be happy to hear this photography is going towards the cause of Traum's big finale in NZ (though the irony he probably won't get back to it on the blog till I leave BACK for Canada LOL). I won't elaborate much, other than to say it will be an adventure spanning millions of years!!!

My new favourite spot in town is a little park area at the north end of Dunedin called Bethunes Gulley. The slight irony is it was just up the road from Salmond, but a little ways up the road. Needless to say from my new location in town I must drive to get there.

A short drive that is very worthwhile in my opinion. 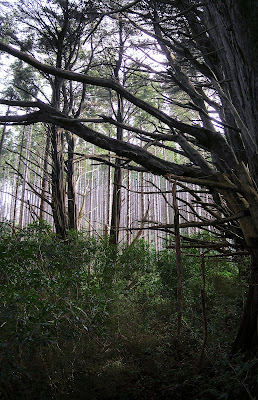 This specific spot, which lies just off the main path, has become my favourite picture taking spot of late. I've been returning to this exact spot for the last three weeks at different times of the day to see what the different lighting effects are like in the forest. The best times so far I've been finding are just after the sun begins coming down after noon, and any point when it is overcast.

This photo is among a FEW that capture the atmosphere perfectly. I love the layers and layers of lines juxtaposed with the tentacle like branches in the foreground. This effect is even cooler in person. If you're ever in Dunedin I recommend a stop by the Gully.

On one of my longer day trips (not my longest, but quite probably 2nd or 3rd longest) we ventured into Central Otago. It is a nice area, but not my top pick of New Zealand regions as it mixes a lot of familiar features from back in southern Alberta. Those being grasslands and mountains. I'm more about my forests and water.

However in the area around the small town of Twizel I made an astounding discovery. Twizel is in between Wanaka and Queenstown for anyone interested in NZ geography.

Of more interest to the greater world, Twizel town sits directly under the mountain Peter Jackson CGed the city of Gondor onto, making it neo Gondor I guess. Sadly EVERYTIME I go up this way I never manage to snap a photo of this mountain. Having seen it, there is no mistaking it, but the conditions have never been right (either trees obscure the camera from a moving car or worse the sun is setting behind it!). 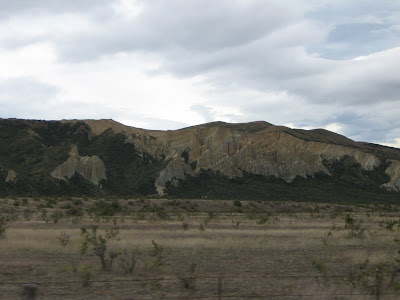 Two years ago while exploring this area with my parents, we drove past this cool outcrop of hills about 15 minutes down the highway from Twizel. These hills were quite unique, and caught my attention to the point I took a picture from the moving car, something I don't normally do.

At the time I thought it was simply a cool random road side sight, and didn't think there was a way to get close to these hills. Man I hate it when I'm wrong! Though the good news was I found out my error before it was too late.

While out on my fossil dig with the University of Otago's palaeontologist, I noticed in several Central Otago town's postcards of a cool set of rocks called the Clay Cliffs supposedly from the area.

This last weekend I set out on the mission of tracking down this mysterious location, that none of the locals knew of (as I was on the wrong end of Central Otago starting my search I now can't blame them... it is a big area). I was amazed finally arriving that I actually knew of the Clay Cliffs, and more to the point I'd actually technically seen them before, as I distinctly remembered these rocks from my parental trip.

Though these may seem familiar to Lord of the Ring fans, these other worldly rocks are NOT actually the same ones used in the film as the pathway to the city of the dead. Those are the same geologic makeup as those, but the film's ones are a much larger formation on the north end of this island. The Clay Cliffs would be too small to look good in a full-on helicopter and crane equipped Hollywood effort, but to those of us armed with just our legs and handheld cameras it was pretty much the real deal!

My only compliant, due to our arriving an hour before sunset (and the sun had already fallen behind the hills sadly) the sky bleached out of my photos.

Through some creative photoshopping I've tried to restore and replace the sky into these shots. (Quick aside plug... check out Sean's more impressive photo tweaking efforts of this week here)
What do people think? Does this look really fake? Keeping in mind the location is a little fantastic and "unreal" to begin with (it was ubber cool, and makes my top 10 NZ spots, and certainly the most underrated attraction of Central in my opinion!).
Posted by Weapon of Mass Imagination at 4:17 PM

Those are some fantastic photos, Craig! I find that you living in NZ just makes me wish that I lived there! I mean, let's face it! It's Beautiful down there. It's also the REAL "Middle Earth" in a sense! However, if you ARE, indeed, returning to Canada soon, then I wish you the best of luck and a really safe and uneventful trip! ;) So, in the Wise Words of Craig Dylke: "Keep Out of Trouble!", lol. ;)


Oh yeah...I almost forgot....Thanks for sharing your adventures in New Zealand! I must tell you that your posts and photos allow me to visualize myself there! Pretty neat! Okay...NOW I'll shut up, lol. ;)

It's great to have Middle Earth at hand, isn't it?