Increase of a "Mark"

Today turned out to be an unexpected (but most welcome) day off. No skools needed me, and it couldn't have been better timed. Having been paid yesterday, and with many things breaking on me all at once this week like my headphones, waterbottle, and shoes (plus my already discussed camera) I used the day to remedy these problems.
`
I then had time for other things. Top on the list was getting Traumador's Canada adventure closer to being finished! We're at hopefully 5 more Drumheller posts, and then what I'm hoping to be under 10 in Calgary for a return to NZ in mid-late October... which is not following my goals, but I think everyone is enjoying this end of the Canada adventure. Let me and PIP know in the comments what you're thinking of the whole homecoming arc if your a Tyrannosaur Chronicles reader... 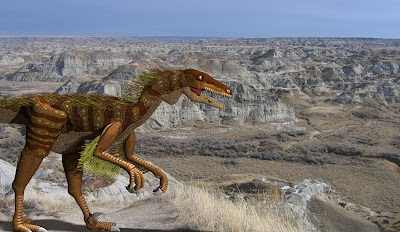 During my weekly phone call with Peter, I tinkered on Zendin the Troodon again.

To give you an idea of how far the model has come, here is a test render of the "Mark 2" era model I did in mid 2008. As of this afternoon the model graduated to the top of the line "Mark 4". 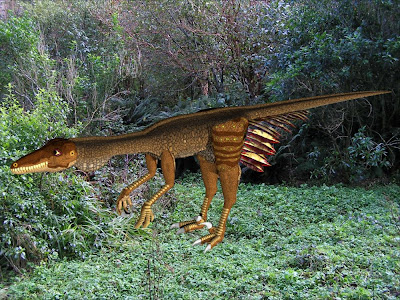 First on the chopping block today was Zendin's old shading scheme. It was cool in comparison to Mark 1 Larry, but doesn't hold up in my modern era stuff.

So I whipped up a simple gradient of a range of brown's I wanted to try. This simple shader looked so good I stuck with it (especially since most of it will be covered with feathers... why waste time on something that won't be overly visible?). 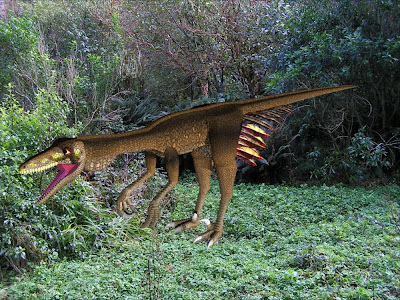 However for the head, which will be exposed, I tried a few extravagant schemes. This first one sadly made him look like he had black eyes. 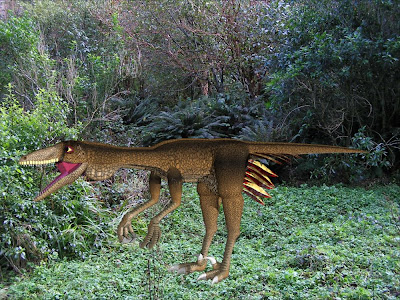 These understated but bold brown lines were just what the doctor ordered (or at least looked good after 20 minutes of failures) so stuck. 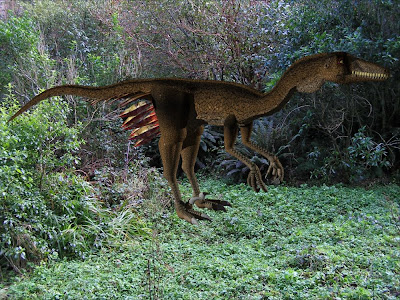 Next I moved on to rigging him. I only had time to do the "body" which extends from the tip of the tail right up to the end of the neck (I haven't ventured into the chaotic and complex world of rigging heads... yet!).

This however gave the model a whole new dimension of life and awesome. The arms and legs should only take me another 20min (I had to go help with dinner after the next render). 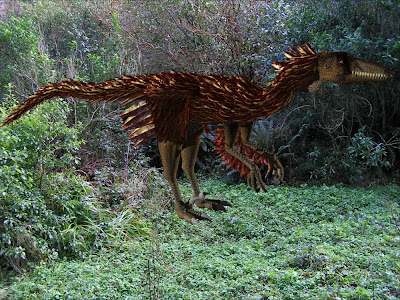 With feathers put back I'm getting happy with the new Zendin... though I fear with mouth closed he has lost a lot of his "cute" factor. With it open he is still has that cute factor.

Anyways what do people out there think?
Next I really really need to get back to my ART Evolved Anomalocarid entries. Plus I have a few new Coelurosaurs to get ready for the big Pack/Canada finale for Traum in Sept...
Posted by Weapon of Mass Imagination at 6:17 PM

THAT. IS. SO. COOL! Really spectacular job there. About the cuteness, maybe it's because the eye looks smaller in that last picture? I'd suggest feathers down to the ankles (that's the way it is with most eumaniraptors as far as we know), but with troodonts being cursorial, I think it'd make sense that they lost some of their leg feathers (like struthioniforms have), so that's really a minor issue.

I've really enjoyed Traum's trip back to Canada by the way, especially the attack of the Crimson Talons and (especially) Lance completely flattening them. I can't wait to see more of your coelurosaurs, I find it oddly pleasing to look at them. Or is it just my obsession with eumaniraptors?

Nice work on Zendin! (Although....the second to last picture made him look like feathers were growing out of his BUTT!! LOL!!!! Or...excuse me, ANUS!!!) Sorry....just really needed to get that out. :P ;)


As for Traum's Canadian adventure....I think it's pretty well thought out and written, though I think it'd be cool for Traum to be able to save himself, for once, you know? :P I mean, as the main character, he's not what one would call a "hero." He manages to get himself in trouble and he needs to Learn to get himself out of it! maybe have him actually Grow! As he gets older, you may need to start making him a CG Tyrannosaur like Larry and Lillian!


I would LOVE to see that we find out what his "Mother" was talking about and maybe Traum becomes the whole "Chosen One" if you haven't done that yet. I think a nice re-entry into the story for Glendon and further Lillian.


There! I think those ideas will suffice. :P Sorry for the length of suggestions, I just had to kind of elaborate on them a tad bit. Oh Well! Can't wait to the next installment of.....The Tyrannosaur Chronicles!!!

Excuse me, at the second to last paragraph, I meant "Zendin" not "Glendon." Oops!! :P

You're right, Raptor Lewis. It'd be great to see Traum stick up for himself. So far, he's mostly being rescued by some member of Paleo-Central or another whenever he gets in trouble.

Albertonykus- Exactly!! He IS the main character after all! In my opinion, the Tyrannosaur Chronicles is getting kind of boring, though somewhat amusing (Hey! I love it when Traumador misinterprets us, Humans. It's hilarious! Go to the post in 2006 when he meets a Tyrannosaur outside of Drumheller after he gets kicked out and tries to phone the T. rex's "boss," and when he leaves, we find it's Out of Order and he thinks he actually made a successful phone call and the "Other line" was actually listening! Man, I laughed sooo hard!! :D), when he gets HIMSELF in touble and SOMEONE ELSE has to save his sorry Tyrannosaurian butt from situations like these! *sigh* He needs to stand up for himself for his own good! Right?

Thanks for the input boys.

Though to just quickly address the issue of Traum being a victim lately (especially with accusations like "lame" being thrown around) we'd like to remind you this is just the BEGINNING of his adventures into the realm of "dark" palaeontology and Palaeo-Central's world.

We have thrown him into the deep end as a means of quickly and excitingly introducing you this whole new side (and direction) of the Tyrannosaur Chronicles mythos. Think of this as just the first chapter (which isn't over yet!), not the whole story. We're planning on delving into this for literally years to come!

You can't suddenly have an action hero from a peanut brained minature T-Rex out of nowhere. As you'll see he has been purposely sheltered from this his whole life, and he isn't just suddenly going to know how to fight off hordes of murdeous raptors and kung fu ready poachers.

The current story is to illustrate why he hasn't needed too up until now (till he of course stuck his snout where it doesn't belong). Traum and all of palaeotology have had secret guardians watching over them, but now he knows it, and you know how Traum gets once he is curious about something...

As you have said Traum needs to grow as a character, and with this stuff he shall. Just not right now... So relax and enjoy. We promise by the end of his whole Canada trip Traum will have a huge heroic moment!

I couldn't have stated it better then PIP myself... Though I'll supplement to not be out done :P

Think of the ongoing helplessness in Traum at moment as his motivation to "grow" as Raptor put it.

As for a CG Traum, we have contemplated that a few times, but it goes against the original mission statement of the blog (which was to keep the unofficial 2003-2006 mascot of the Tyrrell "alive" after our departure). The conclusion of Drumheller will statisfy you on why we won't ever need to replace puppet Traumador...

As for the mysteries of Vivus Dinosaurs and talking fossils, we wouldn't introduce them if we weren't going to follow them up... Traum and his built in magic detector are going places! We are NOT going with Traum as a choosen one though.

Lastly he will be, and as you'll see (in Calgary Can... not Drum) be standing up for himself. You have to learn to sit up before you can stand though ;)

Sounds fair to me. And don't get me wrong, the rescues are quite spectcular so far. (Especially Lance's; did I mention that's one of my favorite parts of the Canadian adventure so far?)

I see now....Thanks guys, for clearing that up, though I agree not having the old "Chosen One" concept for him. I'm glad you didn't listen to me, though. ;) I was having one of my "Insane" and "Random" moments, which, if you know me personally, is how I usually get from time to time especially when I'm wired on Caffeine, lol. ;)

As Albertonykus, that sounds fair. It IS your (I mean PIP) creation, Craig. I guess I'm just a HUGE fan and am excited to see where Traumador will end up by the end of the Tyrannosaur Chronicles!!

Oh my Balrog! Raptor Lewis had the same feeling I was having about the "butt feathers"!

I think I prefer a not so cute Troodon.

A CG Traum may be like adding a CG Yoda for a new SW original trilogy version! I may prefer the puppet!!

I think it's easier to make a troodont cute than a dromaeosaurid, because of the huge eyes. That, and they probably would have been less dangerous to anything their size or larger, such as a human, as they were plant munchers and chasers of small animals. It actually kind of makes sense that to make them cute, if you catch my drift. (Unless you're viewing one from the point of view of a small mammal, in which case they would have looked very terrifying.)