With the winding down of the skool year down here (the last day for primary kids is next Tuesday) I'm finding I have a lot more time. Awesome.

So one of my big projects as of late is building up a much larger army/stockpile of CG Dinosaurs for use in my various projects (mostly Traumador).

One of the problems with Dinosaurs is they take a lot of time to build. Even now with a nice inventory of them to modify into missing type it takes me typically 4-6 hours just to make new textures for them.

Today I pulled off a record though. Not only did I do 2 new textures in a day (I have done this once before), but I remodelled two of my existing Dinos into two totally brand new families! 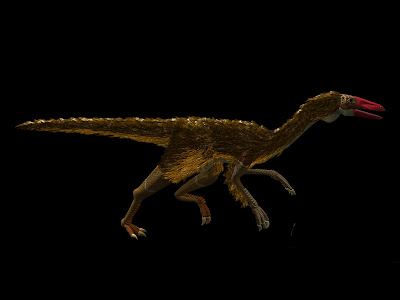 Would you believe this Ostrich mimic used to be a Velociraptor (whose shader I completed, and than I started tinkering with the model and eventually made this!)? He still needs some work, but considering how MUCH different the two are, I'm claiming a achievement for one day. 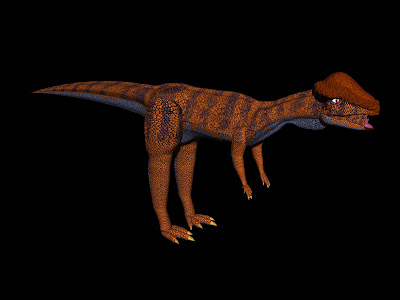 This Stegoceras (aka bonehead dino) was a big huge MEGA breakthrough. I'd been thinking how I might tackle the difficult dome on these guys. Due to all my 3Ding as of late this sort of challenge, even though doing my head in for about 30 minutes, are becoming easier and easier to solve. I'm getting intuitive with how my modelling window works, and even though it doesn't respond logically often I'm starting to instinctively know how to coax into doing what I want.
So now the only really big Dino families I'm in need of are the, very frightening, Ankylosaurs and Stegosaurs. Keep you posted (and they are coming!)

Posted by traumador at 5:14 PM

Stegoceras and Pachycephalosaur are two of my favourites. I'll be glad to see one of them in Traumador's life.

Will Stegoceras be cranky? He looks a little cranky.

Stegoceras is always cranky while doing his morning exercises.

Not much crankier than Craig's Mom when she is doing her exercises! Man she hates that! All hot and sticky - ick!

Awesome, dude! is the Stegoceras going to be "hard-headed?" LOL!!

skool year is also finishing around this coast of the Pacific Ocean.
YEAH! stegoceras!! cool man!

Yeah, they look great dude. Looking forward to your take on Stegosaurus actually. Curious as to the length you will make his neck! I am attempting to find whale sharks tomorrow - wish me luck!