The skool year just ended down here, and as a result so has work for a little while. There was a degree of poetic justice to my last teaching gig of the year. It was at the skool I started off in at the beginning of the year. So that was nice seeing all those kids again (and getting paid for it... I had planned to pop in on their last day, but this way I didn't have to). As I wasn't in their room it lead to the funniest skool yard duty I've ever had with that whole room worth of kids following and swarming around me during my rounds.

I'm leaving Salmond after two years. So packing has had to occur in the bits and pieces of time I've had throughout the week. I hate packing, but it'll be nice to be in a real place again. Hopefully I never have to live with any first year uni students again (that alone over a hundred of them).

I write this on the cusp of departing for a big hiking trip that will see me gone until X-Mas eve. Update you on that when I get back.

This week's big news has been what kept me out of the house... 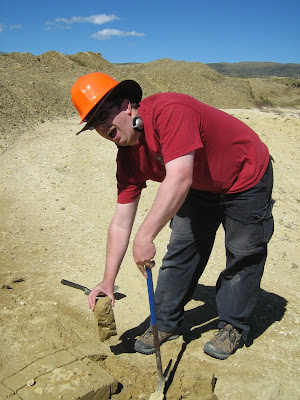 I finally have gotten to head out and do some palaeo field work here in New Zealand! This was a big week for it too.

Last weekend I took one of the vice principals in town and his kids out fossil hunting, and found my first bone in New Zealand. Turns out it was from a Moa, which was cool.

This was quickly followed by correspondence from Dr. Ewan Fordyce of the Otago Museum inviting me to join him on a field excursion. It was really productive, and I learned a brand new excavation technique that I've been told by my Canadian contacts should get written up. So I might look into that, with permission from the inventor of the technique Dr. Fordyce of course.

Anyways Traumador will probably have a TON to say about the outing once we get his Drumheller exploits over and done with (which have barely begun... I need to get the whip cracking over there). 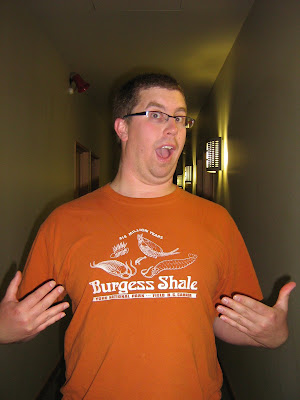 Funny story related to all this, that I have been meaning to post, but haven't managed too till now.

Well about a month ago I discovered many other people did. While out shopping for groceries at the local farmers market I was suddenly stopped at one point by a gentleman who spotted my shirt. His immediate question upon stopping me, I assumed I'd dropped something, was to ask if I'd been there in regards to my shirt. Alerting to not only that I had, but that I'd helped in field work up there we had a nice 15 minute chat about all things Burgress Shale and Cambrian.

Than about 5 minutes later I ran in Dr. Fordyce who also noted the shirt, and this conversation (as an extension of an ongoing internet exchange we'd been having for about a week previous) triggered this week's field outing.

So the lesson dress for success, I guess. Geeky success anyways! 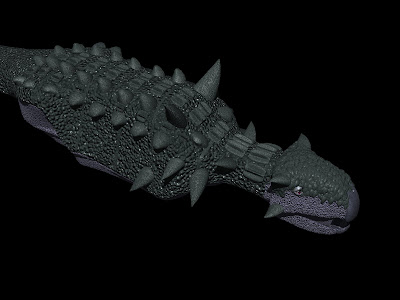 Last thing is an update on the Ankylosaur model. Okay, to answer Peter, technically a Euoplocephalus model.

With everything going on this week I only really managed a day after my last post to work on him. This is by FAR the hardest Dinosaur model I've worked on. I've had to rework the body armour 5 times, and I'm not totally happy with this version. It is a compromise that allows me to pose him when I'm finished. I had one variant that probably would have been amazing, but unposable. Thus requiring me to remodel the whole thing if I wanted a different position.

Anyways I'd love to sit here and update you some more, but I just halfway through that last paragraph have been informed we're leaving. So catch on my return, and merry X-Mas!
Posted by traumador at 6:32 AM

Merry X-mas to you too, Craig!! That is Awesome!!!!!!!! I'm also going on excavation with World-Renowned Paleontologist John "Jack" Horner, Ph.D this Summer. I'm volunteering (assuming I'm qualified)to help. However, to see that I'm qualified, I have to contact his Grad Student Liz Freedman. I hope I get too. Wish Me luck on that!! BTW, I'm envious that you got to there but, at the same time happy for you. Your Burgess Shale shirt is cool.

I like the euoplo so far. The colouring almost seems suitable for a night-time scene.

Perhaps someone more technically minded about the anatomy would see fault with it, but I think it's coming along beautifully.

Have a blast on the hike! I also return home just before xmas. you know I am jealous about your Burgess Shale experience, and I continuously seek to match it!!

Glendon is right, the euop is looking great! (And he is also right about my having issues with anatomy - as you know I always do! Hehe! Anks are incredibly wide, and he may need to be much fatter width-wise!)

We'll chat before xmas, I hope, but if not, Merry Xmas, dude!

have a nice journey ... and merry Xmas too!

I liked your shirt!