Who knew Wikipedia could be so frustrating. All it took was one line and now my whole Saturday has become a giant side project. Granted on with very cool results, but still.

The announcement of a Palaeo Art competition in Europe with some pretty hefty prizes had me thinking of submitting a 3D piece or two into it. As one of the criteria the judges would smile on favourable are illustrations of Portuguese species I decided to apply try and use my kung fu Mosasaurs.

Which is where Wikipedia came in. In my efforts to find out if there were any Portuguese Mosasaurs (which I couldn't confirm or deny... I'm suspecting not, but does anyone know for sure?) I hit a sentence that really pissed me off.

Many of the 'dinosaur' remains found on New Zealand, a volcanic island chain that was never connected to any of the continents, are actually mosasaurs and plesiosaurs, another group of Mesozoic predatory marine reptiles.

You'll note the highlighted and italicized section. What they were saying about most Kiwi Mezesoic fossils being marine reptiles is completely true. However the author thought they were being clever by hypothesising why. They'd heard New Zealand was volcanic, and as it was an island it must be like say Hawaii. Makes sense right? Sure, except they're completely WRONG!

Now I'll admit I on occasion try to connect dots like this myself, but typically I'll have tried to find the answer first if I'm putting it up on the web. This person clearly didn't bother to look it up at all!

If they had they'd have found out about this... 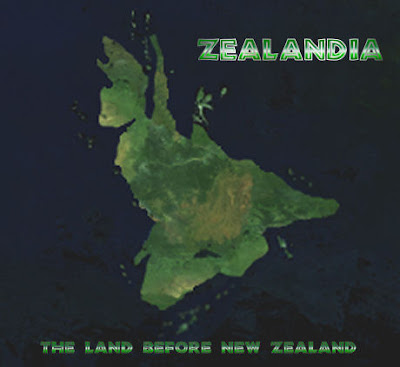 The thing is New Zealand was very MUCH attached to the other continents before it became a separate island "chain". In fact it was connected to two of them! Australia and Antarctica. When it originally separated from them it was a continent itself, Zealandia as geologists call it, which was half the size of Australia!

However due to Zealandia's relative thin continental crust it sank shortly after separation, and most of it sank with the exception of what would become modern New Zealand and the few other surrounding islands.

Now I was so infuriated by the Mosasaur sentence I actually went into Wikipedia and edited it. So you won't find that version. I was gracious enough to leave the original sentence minus the offending aside (which wasn't needed anyway). Now that I've seen how easy it is to change things on Wiki I'm going to be a lot more doubtful about stuff I read on there!

However I was left with both a residual sting of annoyance, and a need to show off my knowledge of this apparently specialized geologic history. Especially given no one had ever illustrated it before!

I'd been wanting to learn how to do this anyway.

I was going to create a realistic continent! 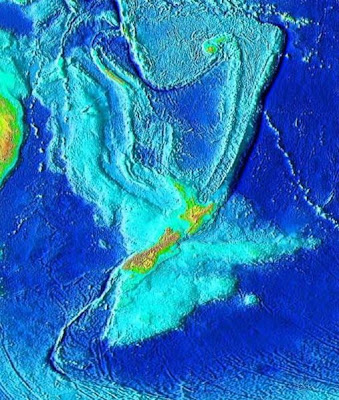 The only reference I had of Zealandia was this topographic map. 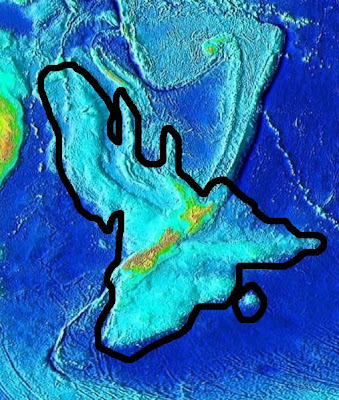 If you weren't able to make out which parts were Zealandia here it is outlined.

Through some photoshopping of a high resolution globe of the modern Earth I was able to steal bits and pieces of various modern continents to make a pretty convincing ancient Zealandia. The great thing is though we know roughly what its outline was, no one can tell me I got the details wrong. The only thing we know is that it was a very flat place, and that modern New Zealand's mountains are a pretty recent geologic event. 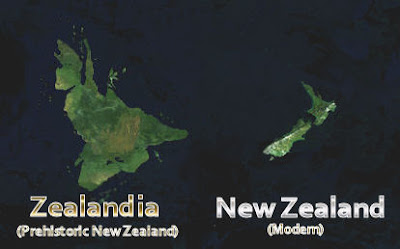 As this creating land from "nothing" technique I'd thought of a few months ago (but never tried) worked in the first go I decided to take some more time to throw a few comparative pics together.

I was going to get around to trying this anyway, just hadn't planned on today, as Traumador will soon be going into more New Zealand palaeo stuff. With a possible "trip" of sorts where he might explore it closer... 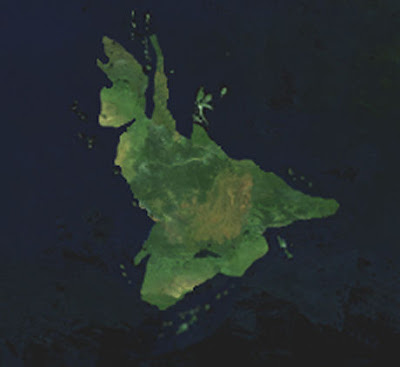 Let me know what you think.
Posted by traumador at 10:58 AM

Wikipedia should never be used for any thing you might to be doing education-wise. Pretty awesome how you recreated Zealandia. And, don't complain if you fix it. Aparently, Wiki and Paleo don't mix.

if you can change something for good, do it! perhaps you could add a link to this post. yes, why not?

Zealandia was a big land mass, I wonder was it was compared to prehistoric Australia. Great job, really great job, Traum.

I always learn stuff from you, Craig --and from Traumador too.

Came to your site by accident becouse i was curious as to what Zealandia looked like. Nice job, yours was the only clear picture i found, thanks.

Good work! I too came here after doing research on the extant continents, found out about Zealandia, and followed the links to here!

I think I know what my next geology paper's gonna be about :D

youre map of Zealandia is great! Im a plant researcher at University of Hawaii at manoa and am studying the historical biogeography of plants in the Pacific Ocean.

I was wondering if I could use your image in a conference talk that I am giving?

you can email me at jaecan@gmail.com