This is becoming a really BAD week... 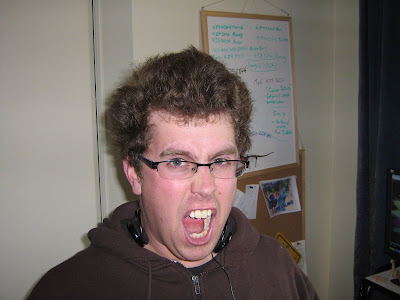 This summarizes my mood at the moment... Though it is an old photo from before my current haircut a month ago. Unlike today though this anger was a joke.

I was hoping for a pretty standard skool break here at the end of term 2 2009. The New Zealand skool year of course goes from Feb till Dec, so to make up for the lack of natural breaks (as remember summer is nov-feb down here) at the end of every term we're given 2 weeks off.
Well ever since graduating and becoming a "real" boy (aka working) I've been working at a holiday program during these 2 weeks to try and help pay the bills. Due to the economic climate around here (the world's problems have hit NZ pretty hard) there aren't as many kids in the program as when I started there last year. So I found out this week I've been effectively laid off.
Which is a mixed bag. As the most senior non-management staff still on with the program, I'm a little hurt by the lack of loyalty I'm being shown back in return for my year long service to them (or at least it would have been a year had they hired me back on this break). At the same time we had some major disagreements at the end of last program, and I can't help but feel I was cut loose due to my trying to hold them to higher safety standards.
Whatever. The pay wasn't fantastic, and now I have a real break. I just hope that teaching starts off and stays strong in the next term (not that this loose of the daycare job is a huge financial hit again). I can handle the lay-off in isolation. 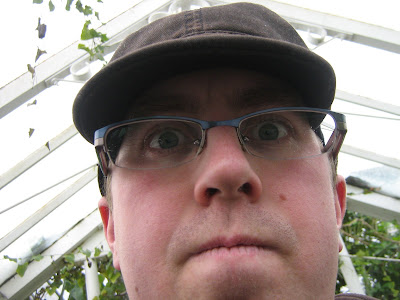 So why did I take this very grumpy self portrait a couple hours ago?
It seems in my life when one thing goes wrong everything else needs to follow suite at risk of feeling left out. So in addition to being laid off yesterday, my camera just died today... 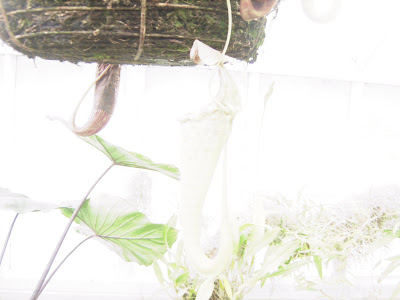 It seems my shutter has worn out. It either stays open 3-5 times longer then it should, and thus way over exposing photos like this one here. Or if it does manage to snap a good photo the shutter will not reopen without me turning the camera off and restarting it. At which point it overexposes for the next 5-20 pictures, randomly taking a good photo and requiring the whole cycle to start over! 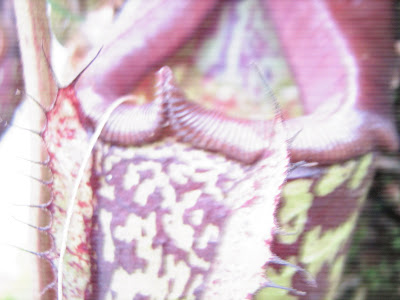 It has also been taking pictures with these scan lines. I'm taking this all to mean it has a bunch of problems all hitting at once, and no doubt means my camera is on its last legs!
I guess I shouldn't be too sad, it had a very impressive lifespan and career considering how much I used it! I took my camera everywhere with me, except work!
It was my graduation gift for my first degree back in 2006. As of such it jumped right in documenting the many adventures of "Team EXTREME!" TM at Badlands Science Camp, and then progressed immediately there after to its greater lifelong purpose. Being the official camera of Traumador the Tyrannosaur. It is responsible for 95% of the photos that currently grace The Tyrannosaur Chronicles.
Over the 3 years I owned it my, now poor deceased, Canon PowerShot A430 managed to take 54, 413 pictures. Which from what my other photograph buff friends tell me is a lot of pictures... To give you an idea of just how many that is, I've "only" kept about 20,000 of these pictures, and they take up about 23 gigs.
Oh well. So I'm bummed out. Not depressed, but anything more going wrong and it could very easily push me over that edge. 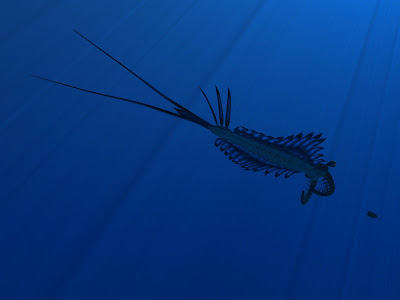 On the positive, last night I made some huge progress on my Anomalocaris. Apart from some minor model re-tweaks the big change is of course the shading. 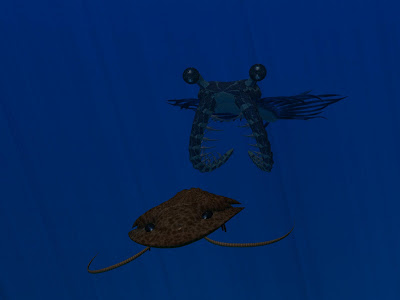 So finally, outside of Dinosaur scaly skin, I've found a critter whose textures are easy to create. This new (I think rather good looking) colour scheme took me under 20 minutes!

So my next for my gallery submissions I need to build the Burgess environment, and other critters to occupy it (sadly this cartoon Trilobite doesn't cut it).
Posted by Weapon of Mass Imagination at 1:21 PM

I'll confess to being a bit superstitious about luck -- and my superstitious side firmly believe that good luck and bad luck come in waves.

And anyway, now you've got an excuse to get obsessive about shopping for a new camera!

Craig, I'm truly sorry you had such a crappy week.

Well to try and cheer you up, I've got a quote for you: "S**t happens." (First heard from the movie Forrest Gump.)

Hey, Life bit you in the butt, but that's life!


Look on the bright side, your Anomalocaris is actually impressive....not that your other CG prehistoric animals weren't good.