Hot off the press from Laelaps (for whole scoop check out his far superior blog) the first ever confirmed footprints of a Dromaeosaurid (aka raptor dinosaur) have been discovered! 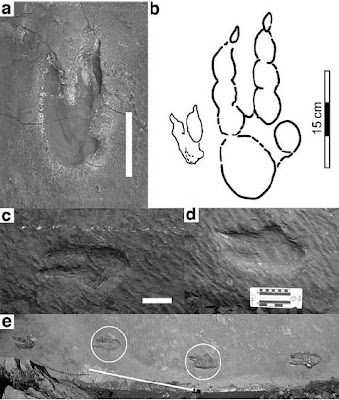 There are multiple sets from the same geologic formation. One of which is very interesting as it shows multiple individuals possibly walking together and in unison... in other words possible pack behaviour.

Interesting to see that their walking as opposed to hopping. Only a bit over a year ago I had a number of Tyrrell Science people flip my world upside down by saying due to an inward angle of the hips that Dromie legs came together at the feet, and thus made them more likely for a Kangaroo type hop.

I guess the paradigm isn't as flipped as I thought. Which is equally flipping as I'd just started to accept bounding raptors... Got to love science!

Posted by Prehistoric Insanity at 4:02 PM