Well it's that time of year again! Crunch time!

Granted I've never had a blog during a proper crunch (apart from previous crunches in this program which just don't compare to this one!). I have so much to do that I have felt like I'm bleeding from my eyeballs. No they aren't tears, but my eyes have swollen twice. Rhonwyn thought I'd been in a fight. That is till the swelling swapped eyes!

What this means is that I've spent roughly 10 hours at my puter today. That is pretty much the whole waking day thus far, except for the 45min X 2 for meals and 30 min for a walk to the grocery store for study food.

Now a tradition of my for such crunches is of course to procrastinate. Before you freak out on me I got that out of my system last week... Meaning I have to pick up for my moderate slacking off now (to be fair I DID get 5 assignments done, and this stuff I'm previewing for you).

On to the slight bit of sunshine in my otherwise depressing modern life, the traffic on Traumador's blog has nearly gone up 150% in the last month. I attribute this to a combination of the current fun and Dinosaur intensive Cousin Larry Visit storyline , and my current targeted advertising.

My system for advertising has been quite ingenious, but sadly I can't boast about it on the open web as I don't want everyone to scam my system (but if you email me I'll let you know if you ask nice).

Keeping up on these two tactics I'm hoping to keep up the increase in Traum's readership. So the foremost is how to keep the palaeo content of his page up? Well you've already seen the Sauropod for the upcoming "the other" storyline. As a palaeo finale to his tenure here in New Zealand I have conceived this... 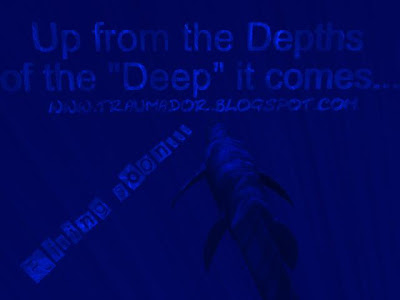 This was the prototype ad for Traumador's "Taniwha" storyline. Taniwha are sea monsters of Maori myth and often are reptilian in form (other times a BIG shark or whale). They often in the stories sound like they could be marine reptiles from the Mesozoic, and as of such a species of Tylosaur has been justly named Taniwhasaurus.

I figured why not have one come back and pay Traumador and company a visit in Dunedin... 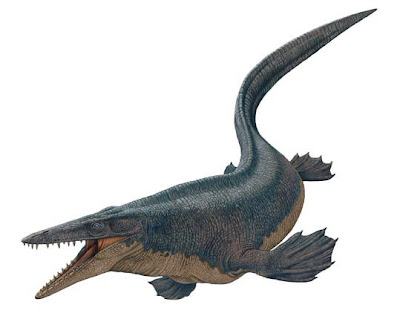 So for a few hours (I'm at the point where modelling something only takes me a couple hours... meaning I waste little homework time on it... just enough to unwind after skool or classes) I tried to model something like this. I love this rendition of a mosasaur minus the tail. I went with the more paddle like tail restoration from Chased by Dinosaurs. 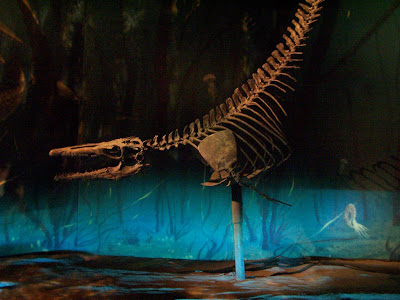 I also tried to base my model as much on skeletons as I could. I'm not sure what clad of mosasaur we have in Alberta such as this one from the Tyrrell, but Mosasaurs for the most part are all roughly the same. 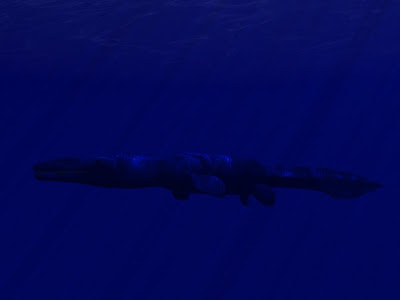 The first rendition of the model. None textured, and frankly a mix between a Pliosaur and a Mosasaur. The one problem is that I have a tendency to slim things down (Peter always critiques me justly on this habit), but with Marine reptiles this means a Mosasaur turns into a Mosasaur.

So I had to come back to the model table and try fattening him up. 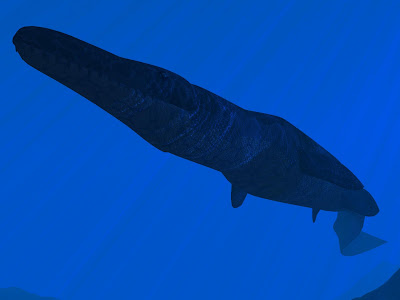 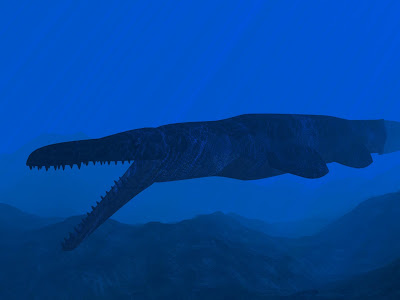 The final problem was the head. It was too crocidilian/Icthyosaur (partially due to my not paying attention to tooth placement initially). I had to readjust mostly the top jaw to be more triangular with less angles and curves (though the Chased by Dinosaurs curve into a rather slender snout... I opted for a more robust snout). 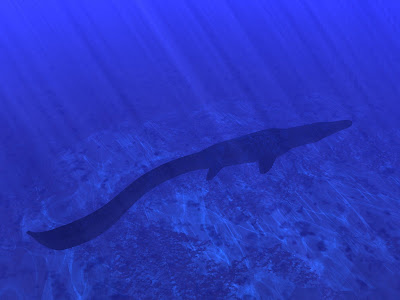 This is my favourite render of the Mosasaur so far, and ironically it's from the old model. You'll note how the body is only 1/3 the length of the animal, and it still has the sloping snout. However I'm in love with this lighting (which I can reproduce in other angles... sort of... this effect is caused by the angle of the light shafts) and the sea floor (which is not reproducible... it's actually a flat surface that this exact camera angle has made look like a gently sloped underwater mound).

After my retweaking these are the near final version. Let me know what you think! PLEASE!!! 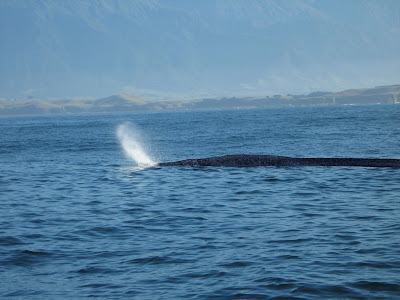 As Traumador won't be heading in the water (right away ;p ) the Taniwha needs to be seen at the surface a bit. 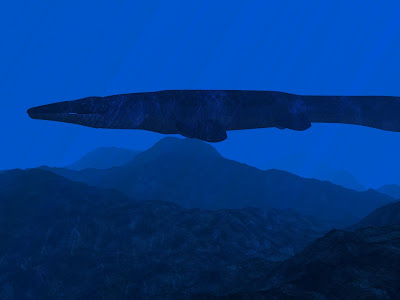 You'll note the new head design. In particular give me feedback on this... 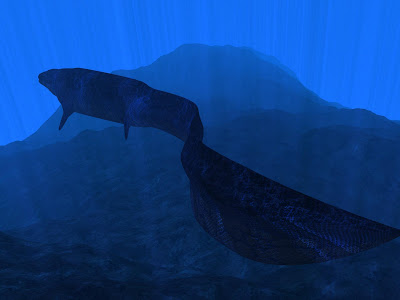 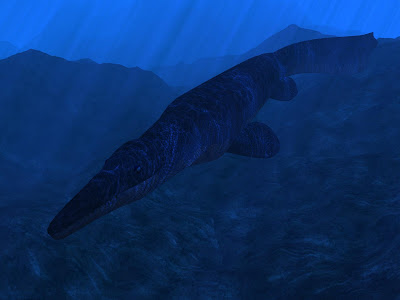 More of that head. Again comment the heck out of it! 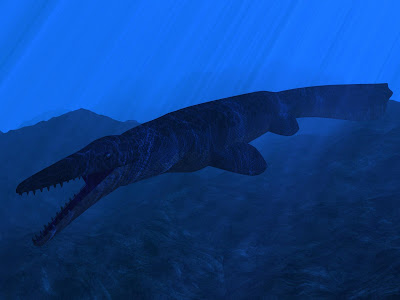 Open mouth. The improvements here are teeth in proper skeletal placement, and skin flaps towards the throat. Feedback important here too! 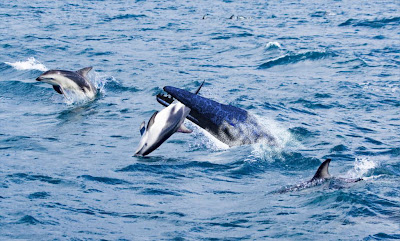 This and the next shot are finals for the story. The Taniwha comes to everyones notice due to its food source in the present (his typical prey of course going extinct only to be replaced with mammals...) 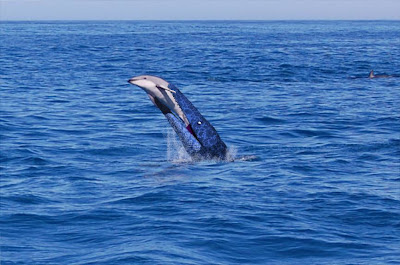 My favourite of the new models clips 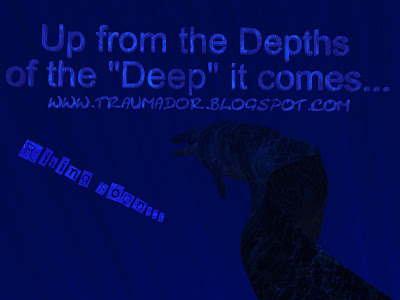 So yeah keep your eyes peeled for "Taniwha" coming hopefully sometime just into the new year. Of course probably later than that. So much of my Traumador ideas have been pushed back. I'd intended to get to Larry in May!!!

Back to the homework for me. I've got 15/70 lesson plans done today... I've only got another 4 days... but these were the harder ones... So hopefully I'll be okay... If not no more blogging for me.

On that not I do owe you a post on my life including such things as my new inhaler and Captain Windo! Only if I get my ass in gear and get crackalacking though!

Posted by traumador at 3:52 PM