My Great Prank: The Demon Clock

Two posts in two days. Try not to faint out there. This morning saw the end of one of my little pet "projects". Though I hadn't invested a lot of man hours into this little ongoing event it has taken three weeks to come to fruition.

Andy the German living down the hall from me is notorious for leaving his door unlocked when he is not in the room. Those of us who hang out with him have been trying to train him to change this habit for obvious reasons. The foremost of which is his flatting next year with a dozen strangers.

Now efforts up until I really stepped in had been rearranging his furniture, hiding some of his things, and even planting other peoples things in his room (mostly Dinosaurs from my room).

I only partook in these efforts once (apart from letting people borrow my dinos for plantation). Duct taping his ping pong paddles behind the flags on his walls we were rewarded with a good amusing 30 minute search on his part. Now that might seem mean, but I gave the give away clue of search "wall to wall", and I thought giving me away 5 minutes into the search one of the paddles fell out from behind the flag. He didn't bother looking behind the right one at all! I had to tell him where it was...

Well the ladies (these days dubbed Craig's Angels) had been pushing these lessons for about 2 weeks with no real change in Andy's behaviour. One day walking by his room after dinner I checked his door to discover it was, you guessed it, unlocked. Opening the door I would have just been content to report to Rhonwyn or Clare that the German wasn't locking his door still, but something caught my eye. 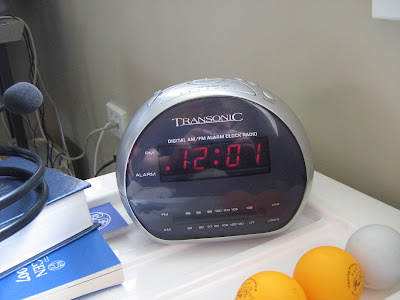 It must have been the red shininess of the numbers, but I fixated on the alarm clock. A brilliant scheme entered my mind within seconds. I ran in and set his alarm for 10pm. The idea being the alarm clock would startle him. Also in the back of my mind was the plan of repeating this several times, and hoping he'd conclude something rather than someone was behind setting the alarm.

Unfortunately Andy didn't come home till after the alarm sounded (fortunately though I was able to reenter the room due to lack of door locking and turn it off). I did keep up with the campaign of setting his alarm. Now you might feel sorry for him, but in my defense this couldn't have been done if he just locked his door like he should have...

Andy didn't mention a thing about the clock. Leading me to worry he wasn't noticing it or had figured out what was happening.

Where things got cooking was when we were all hanging out in his room a couple days ago. I made an excuse to hit the alarm clock in a joke deliberately trying to bait him into talking about the clock. I was rewarded with him "speaking of the alarm somethings wrong with that clock".

I barely contain my laughter. Andy though thinks that the clock is simply broken, and is going to throw it out... Time to salvage this. I casually in a very me type way "what if it was a ghost?". It's the kind of thing I'd think of and ask anyway, but in this case for true purpose not just imaginations sake.

"I'd never thought of that," Andy replies clearly a little wigged out. He than makes the most critical mistake of the conversation (if you're thinking I'm evil... which everyone now thinks I am MAAAAAAAHAHAHAHAHAHA). He informs me this is not his normal alarm clock, and that he'd been given it by a friend who just moved away. Normally Andy uses a dinky little clock I'd never noticed before... Till now! 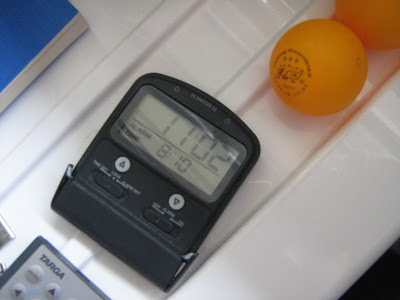 Yesterday I launch the ultimate arm of this prank. Finding his door unlocked AGAIN (see I'm not pure evil. Only casual. This won't have happened if he'd JUST LOCK HIS DOOR!) I set both clocks. My main one for 10pm, and the other for midnight. My plan unfolds perfectly as you'll see, but try to predict why I set them for different times. Before I'd thought about it I was just going to set them to go off at the same time, but I came up with something way more scary!

10:05 comes and I get a disturbed knock at my door. Opening it Andy stands there "it happened again!". Knowing it would be him I keep my game face, and come to inspect the clock with him. I do nothing but objectively talk about it being a ghost, and for the most part deny ideas the German hasn't even thought of. The best way to plant ideas in peoples minds: That's a tip kids.

Then I setup the real life twist for Andy, and the reason I set the clocks differently. I suggested I take the clock to my room to see if it'll repeat its behaviour in my room. Andy eagerly agrees. I joke that the "demon clock" won't get me tonight as I leave... Well aware that'll be a key line of logic Andy's going to be left on with the clocks.

Midnight and some minutes while dozing off to sleep I'm awoken by... the demon clock?!?!?!? no my cellphone! with a message from Andy "it happened again!". As the "evil" son of a bitch I am I laugh myself to sleep.

This morning I'm rewarded by the German seriously freaked out. I'm faced with a morale conundrum. Do I keep the prank going, and possible drive him mad. Or do I take this as a victory, and salvage the argument I'm not actually evil.

So telling the German I'm rewarded with an embarrassed laugh from him and punch.

All things considered though it was worth the 20 seconds a day and a bit of planning for three weeks to get to this point. Sadly that climaxes the pranks I can pull this year at Salmond (but with only 5 weeks left to normal uni I guess that's alright).

Posted by Prehistoric Insanity at 7:12 AM

Labels: My Life, My Projects