My second go at second posting has been much more successful. As of the end of last week's control I've passed. That said I have my last evaluation tomorrow during what has been at the best of times my gong show unit. I HATE yeast and bread... More on that this weekend with my big summary post of the last month.

Needing to post something, but not take too much time (it's 11pm and I have to get up in 8 hrs) I figured I'd throw something up here on my favourite show of the year. Granted I don't watch any TV anymore, but this is still the coolest thing since sliced bread. Except I hate sliced bread. Okay I'll just get to it (I think even by now you're seeing the wear and tear of the last while on my brain). 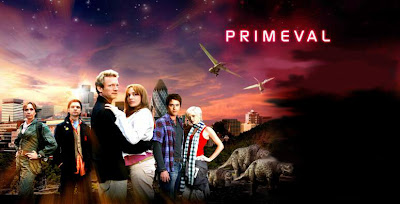 So as you can tell from the pic the show is called Primeval. Peter Bond alerted me to its existence early this year. However due to it's being a British show, and New Zealand not getting anything till at least 6 months after everywhere else I had to wait. Fortunately unlike North of America we DO get British shows here at all. I had to wait for the DVD release as I missed this when it popped on TV here due to my funny enough not watching TV.

It was worth the wait!

The shows basic formula is:

Ghostbusters + Dinosaurs x Weekly TV Show = *BEEP*ing Amazing
_
The show goes like this. Holes have opened in space and time back to various points in Earth's past and future (haven't made it to this ep, but I know it's coming) allowing various critters from those eras to wander into ours. They being prehistoric instinctively know they must eat and kill anything remotely human with as much property damage as possible. Now it is up to a team of government scientists to not only deal with the critters, but stop the mysterious time holes.

If they didn't make this show I was going to... With the effects people of the Walking with Dinosaurs series on this though it is the best it is ever going to be!


Even more amazing despite the premise formula I gave you technically not a SINGLE Dinosaur appeared in the first season! Many animals from the same time frame, but none were true Dinosaurs. Creatively I find this very brave of the producers, and very telling of the shows quality that it can make it without Dinos in its opening.

All I can say is it makes my top 3 TV shows of all time, and making this even better. The show has been renewed for a second season! This time around with confirmed Dinosaur appearances in at least one episode (Velociraptors!).
Posted by traumador at 7:29 PM

Oh it is such a good show, dude! Check out the sixth episode, it is a goodie! I love the writing on the show, and the non dinosaurs! I'm really glad you could see it! Which is your fav ep so far? I just picked up Prehistoric Park yesterday, another great one (nice, but not as exciting as Prime or Chased). I'm back home, but without consistent internet. Will bring up Skype whenever I'm on. Chat soon dude,
Peter