Well my creative efforts on legitimate projects like Delta Patrol or getting Dan's sisters wedding fully edited (so close on this one) keep getting intreupted either by homework or my parents. Today my first weekend day free of internet course work, and my parents get me to sort boxes of my stuff... grrrrrrrrr 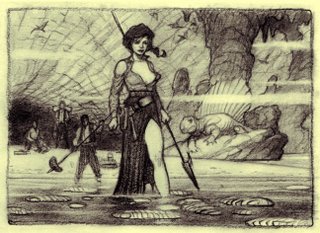 Though I wish I could claim some sort of Indiana Jones type discovery whilst going through the 5 boxes of my crap I did make a cool find today. Sadly during the internet break I snuck in. It was this picture of a pulp era heroine and here crew at the center of the earth hunting trilobites!

Now I'm sure some of you know my weakness for this particular genre. I've read the majority of the all the prominent such series and stories throughout my childhood. This picture captured all the cool elements from these childhood memories and impressions. The exotic prehistoric ecosystem, alien inner core environment (in this case complete with cavernous roof of the Earth itself), and of course hot babes!

Just makes me want to go film a pulp style center of the earth story. I've even got the components in the works for such a project...

Trilobite for a nice any lass whose brave enough to hunt them (and star in one of my movies :P )

Pterosaur which would of course not only have to attack the heroes in the core,
but if I can manage it be ridden by an evil barbarian at some point too

Ceratopsian (Centrosaurus in this pic, but I can rearrange horns and such) that must have the dynamic herd shot, and at some critically inconvient point have a massive stampede

Of course the Tyrant King Lizard King himself ready to rule over and plague the inner world kingdom he so rightfully deserves! 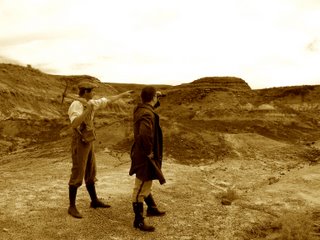 I also have my own threads should I manage to get cast.
Also might be fun to sepia the film for added effect...
Oh well this is all sadly conjecture. I just needed to get some creative energy of a Center of the Earth variety out of my system, and this was as good a venue as any. Too bad this is the best I'm able to do at moment.
Today it was -5 outside, and there is snow on the ground. Added to this Alberta isn't the most suitable prehistoric looking filming location. If only I were moving somewhere in oh I don't know let's say 2 months that was not only warmer, like say summer, and had ferns and crazy greenery. If only. It might give me something to look forward to.
That and a new camcorder LOL
Posted by traumador at 10:10 AM

Hi there Craig - this is one of the parental units. Sorry to mess with your weekend, sweet cake, but the alternative is to let us do your unpacking for you. Let's think for a moment what that might look like - dumpster on one side - fire place on the other. Hmmmm - maybe it is best if you do it yourself...