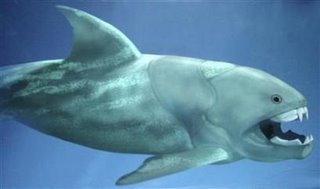 Scientists this week published their findings on the biting force of Dunkleosteus the giant predatory armoured fish of the Devionian. Based on biomechanical models and simulations they have determined this monster packed the most powerful bite of any fish currently known. Coupled with that it was able to open it's month extremely rapidly which probably caused a water vaccum effect which made it that much easier for Dunky to catch its prey.

If you're looking for a fun video demenstration BBC's Chased by Dinosaurs Sea Monsters has a fantastic sequence all about Dunkleosteus and more to the point this horrific biting power. I suspect when they made the movie their advisors were the same scientific team that made this find. 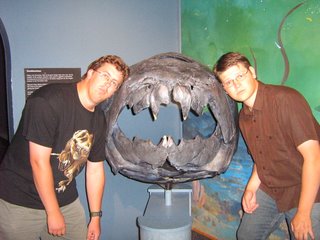 To think me and peter put our lives in our hands all those summers obliviously wandering by these jaws...
Posted by Prehistoric Insanity at 10:27 AM