Watching a lot of events...

Typically I don't watch a lot of TV. During the Olympics that rule goes out the window.

A combination of having to line up for hours to get in anywhere (which gets old after a day or two) and Lady R having really hurt herself with a fall in the shower (it turned out a lot better than it could have! We have bought Peter a nice shower mat as a result ;p ) has led to the best way to take in the events is through the boobtube. So here I sit otherwise "wasting" time. 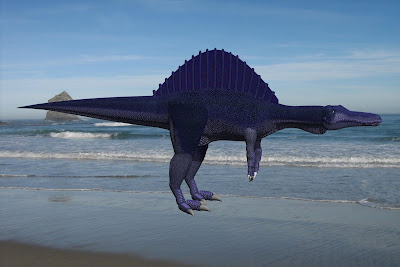 Yes I can't type overly efficiently (I do this post during a quick break between Curling and Skeleton) while there is audio in the background. However I can 3D pretty well. So this is the result.

What are people's thoughts on Mr. Spinosaur?

The reason for pushing through my none ART Evolved Dinosaurs. Well for one, me and Bond are still planning a big joint live blog for the Therizinosaur. Second there is another event I'm hoping to build to for the Olympic finale...

You may have caught that Brian "Laelaps" Switek has done a poll on hypothetical Olympic events an Albertosaur should do here in Vancouver... If this isn't convergent (meme) evolution at work, then I don't know what is! 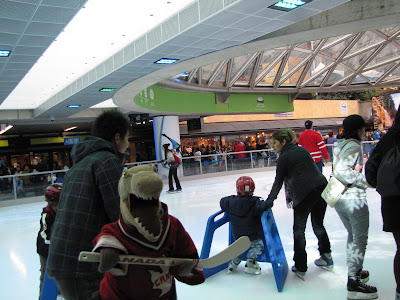 I'm building up to Traum and Lillian competing (against other Dinosaurs) in the majority of the events he has listed in his poll. As we're both on the same page (independantly) I thought it would be good to try and team up with Dinosaur Tracking on this, as they beat me to my punch (yet I prove I was doing it first, as I had Lillian in Van a good 24 hrs before their post, and have some great Traum playing sports shots in the Camera already from this week :P).

So head over to Dinosaur Tracking and let them know on this post in the comments you'd love to see them put their weight behind the 2010 Dinosaur Olympics on The Tyrannosaur Chronicles!

Posted by Weapon of Mass Imagination at 8:28 AM

The only thing that bothers me about the spinosaurid is the pronated hands. Saurischians (with the exception of derived members in the sauropodomorph lineage) couldn't face their palms down in neutral position. (Oviraptorosaurs and eumaniraptors can lift their wings out to the sides so that the palms face down, but otherwise all theropods look like they're applauding.)

Strangely enough, I had the idea for dinosaur Olympics nearly a year ago: http://albertonykus.deviantart.com/art/Dinosaur-Games-122570640