During the month of April I took an unplanned and unannounced break from working on Traumador. I'm not sure if anyone noticed. The traffic of last month seems to indicate the greater web did (yet 80% of his visitors are looking for pictures, rather then his lovable hijinks).

Instead I spent that time working on my Gorgonopsid for ART Evolved. The results were spectacular(ly fluky... all things considered).

So despite the fact I've gotten myself out of my Traumador related rut, somehow today I spent my whole day off (no skool's wanted me today) starting on my next ART Evolved entry. 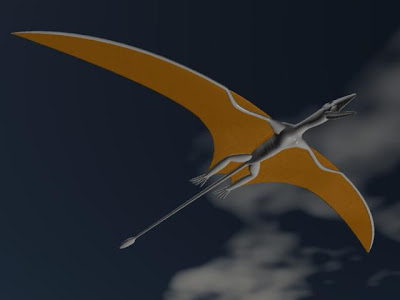 Here is where i leave it after a good afternoon of work on it. I'm aiming for a early Jurassic Pterosaur, but haven't really figured out which one yet. I've been using the primitive Triassic Eudimorphodon as my reference, since as far as I can tell most early Pterosaurs looked roughly the same, and it was the only one of these that I could find an okay set of referrals for. 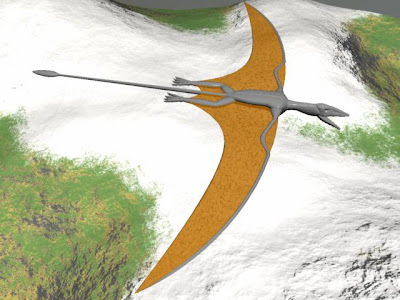 So why did I spend my day on this rather then more pertinent Traum work (he has a BIG string of CG Dinosaur intensive posts on the horizon). Well I got an email that offers the promise of big exposure for ART Evolved, and as of such I was on the "phone" with Peter for a while discussing this.

Well I can't really concentrate on much while I'm talking on the phone, but casual 3Ding is one of the very few forms of multi tasking I can do. As I don't need to focus on a new modelling job as much in the early stages, this guy was the first that popped into my head (though come to think of it there are some I'll need for Traum soon too...).

Anyway Pterosaur experts may begin letting me know things that need fixing. It's easier to fix them now before I start on texturing and furring... Oh my good old friend fur again... "Yippee"
Posted by Weapon of Mass Imagination at 4:21 PM

Paleo King said...
This comment has been removed by the author.
4:15 AM

A nice model, very smooth, though it looks a bit - er - flattened. Especially the torso and the legs.

The arms also have a spaghetti appearance, i think some segments would make it more realistic (though I kinda expected this, being as it is the early version of the CG model, and I notice the fingers have yet to be added).

I think Dimorphodon is a good choice for the genus... though this would require changing the head... Scaphognathus is another good choice (The Dinosaur Heresies, p.281 is a great resource for Scapho if you have a copy).

As a final note, I'd recommend attaching the wings closer to the hips or even at the base of the tail... aside from my view on the wing attachment, this might actually make the tail a better steering device, being partially connected to the wings.

I know after all we've posted on ArtEvolved it got a little contentious, however I agree that the scientific debate between the PhD's is far from over and there is no one "correct" way to draw pterosaurs at present...

But IMO, I have seen way too many bat-winged Rhamphorhynchoids in just about every book, scientific or not, on mesozoic animals, and I wouldn't mind seeing some fresh new ideas.

BTW this isn't a personal criticism, just an artistic tip. I myself have next to no experience in CG (yet!), so props to all your CG work so far. I'm working on some pterosaurs too, hope I get them done before the deadline (not like the disaster that's presently happening with my Lourinha competition piece, which I will hopefully post on PaleoKing soon...)

Hope you read this before the fur goes on !