I just got a very depressing email.

I can't afford to upgrade my 3D software.

I had been holding out hope that though I'm a version behind on Carrara that I might still be able to upgrade to the latest edition. Instead I was informed I'd have to buy the whole program over again. BEEP!

In $US this is pretty steep, but take my worthless $NZ and it'd be cheaper for me to buy a car down here (while my current 20 year old car anyways).

This has me bummed, as it has a very key feature that would save me countless hours. When rendering pictures at moment, if I need to make a correction or change it means rerendering the whole picture. This can take anywhere between 1-60 minutes. However in the new edition it only has to rerender the objects or attributes you change. Meaning (especially with fur and feathers) I can cut my rerender time by an astonishing amount in theory.

However I'll only be able to dream of this for now. 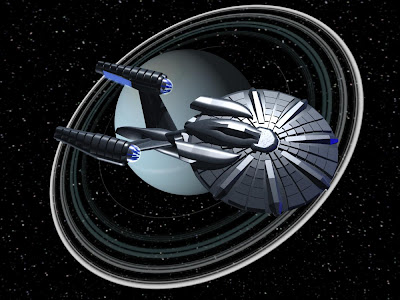 In frustration, coupled with brain lag from a long day at work, I fell back on my Model C Enterprise. I did crank out the second last raptor picture before hand (it taking me 1.5 hours may have had something to do with my giving up). 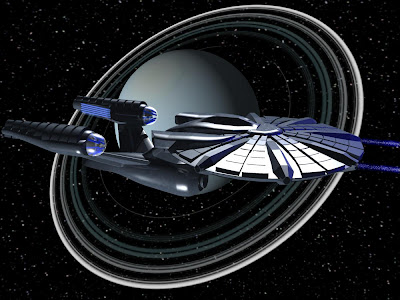 Despite the fact I'm not putting tons of effort into this bad boy I'm getting some pretty sweet @$$ results. Mind you its not supposed to be an authentic from the show look, so I can claim it looks good if I want. 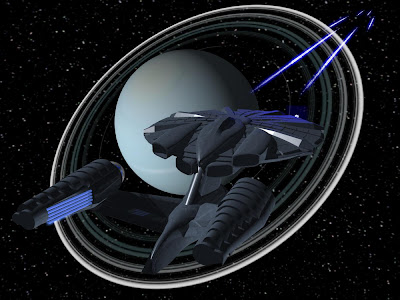 This is how I would redefine and imagine the Enterprise if I rebooted the franchise (not that I didn't like the new Enterprise, it was one of my favourite elements of the movie). It would be a bit more militarized, not due to wanting a Star Wars feel to the show, but to me the Defiant in Trek always seemed the better fit for most missions as she could survive them when things went wrong (which on Trek let's fact it is always!).

Anyways I think I'll get back to work, and yearn for a day when I can afford to render with a mistake in there somewhere.
Posted by Weapon of Mass Imagination at 3:53 PM

Have you taken a look at this?

I've been curious -- but I haven't gotten around to checking it out yet...

That stinks! Hang in there Craig! Hopefully, you'll have the money one day and, when you do you can probably whole new version of Carrara and better than the one you're hoping to buy. That's the cool thing about technology trends, baby! LOL!


Seriously, though, Craig. That still sucks and doesn't seem fair, I know, but remember to look at the bright side! Hey, it could be worse!

it's just a matter of time! be patient my friend