I hit my first big brickwall of the skeletal era. "Feather"ing a fully rigged model.

The technique I am using to "Feather" my Dinos is not called feathering. It is a process in Carrara called surface replication. What I am doing is taking one or more object (in this case feathers) and telling the computer to make up to 10 000 copies along the surface of another object (the body in the Dinosaur's case).

In theory it sounds great, and should make feathering doable (as opposed to manually placing all those feathers by myself). However it doesn't behave the way one would logically expect. For some reason the math or programming at its heart causes replicated object's pitch, yaw, and roll (known in 3Ding as X,Y, and Z) to all swap with each other, and in none intuitive manners. Coupled with a none existent means of manipulating replicators makes for a lot of hit and miss adjustments by me. 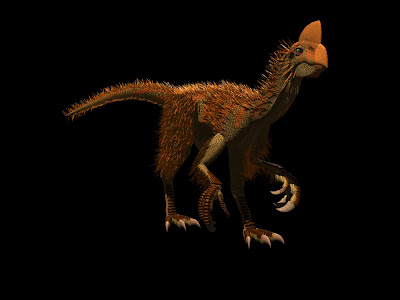 This sample of my current efforts to feather my Oviraptor give you an idea of the problems I face. Apart from the legs (which are doing exactly what I want) this guy looks like he's stuck a claw in the toaster.

Leading to a new catch phrase for my creative anger. It may not be very imaginative nor difficult to figure out, but it applies none the same. "I HATE feathers!!!"
Posted by Prehistoric Insanity at 12:20 PM

Feathers are fun to draw in pencil.

I agree with Michael, this is looking good.

This oviraptor looks cute!
I like its neck feathers.