Well time is running out before the Synapsid gallery goes up on ART Evolved!

I don't think it matters when I try to schedule things, life has a tendency to get crazy around crunch time (in addition to the normal pressure of the crunch). My side job here NZ had a particularly stressful episode this week that nearly saw me quit it. Instead though I got promoted to supervisor out of the (nearly heated) debrief on said incident. Which is good news for me, all except for my creativity.

Meaning getting my Gorgonopsid ready for May. 1st has been like ACTUAL work! 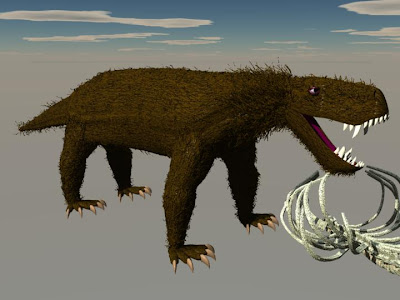 This is the final version. I'm not totally pleased with him (but what's new). The combo of the Gorgon's natural face structure (I've found the ppl at Impossible Pictures made some creative tweaks to their CG models skulls for Walking with Monsters and Primeval to overcome Gorgon's built in adorablity) and my muppet like fuzz has made this guy more cute than apex predator.

The one silver lining of the fuzz is that if I ever have to make a "woolly" anything I know how to do it!

I don't have the time or inclination to rework him anymore (again I have no other application for this model afterwards), but I need to cover up his cute factor somehow. 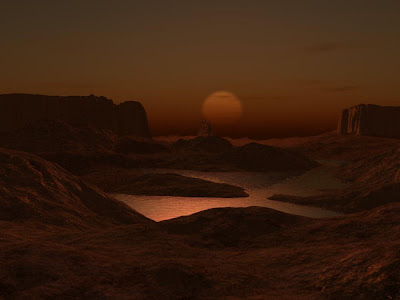 My solution is atmosphere and setting. By obscuring everything in moody sunset lighting, the Gorgon should hopefully lose some of his cute.

For the moment behold the bedrock of Permian Karoo. This is just that though the baseline for the scene. I spent a good solid 5 hours fixing and making this landscape. At first a small lake in an otherwise desert like world seemed easy enough. Of course the road to hard work is paved with under-estimations.

I have added other details to this scene, but have purposely been hidden (more like a romulan cloaking device built into my 3D program) for this preview image.

The final piece should hopefully invoke the feeling of a shot from a nature documentary. It should be chalk full of nightfall behaviours of the Gorgons. Mind you, I did note the hope I'm pinning this on.

The set and the un-posed Gorgon are finished. Now I need to merge the two. Which might prove tricky... If past lessons are of any value!

Posted by Prehistoric Insanity at 6:45 AM