Art Assessment, and a Palaeo-Know-How Challenge!

Tomorrow is a potential exciting day, dependent on whether I have work or not. I'm meeting up with Dr. Fordyce to have him critique the whale. 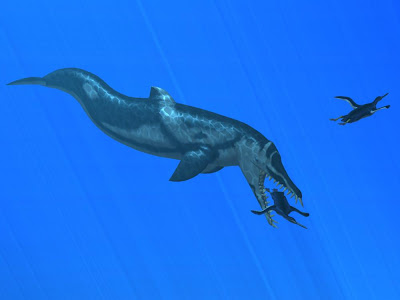 Rather than just show Dr. Fordyce the boring "flat" version of the model (flat being the rigid unposed version of a creature, making it often look like its been road killed or turned to stone... the 3D version of Glendon's "ugly phase") I decided to create some prototype poses and scenes for him to look at.
`
This being a general idea for a piece I have, complete with two brand new primitive penguins. The penguins were today's modelling project, and though not my best effort (up close) are functional in this long shot. I plan on building better versions if Dr. Fordyce likes this direction for the project.

What are your thoughts on it? It is not a final by any stretch just the general idea.

Finally just for my own amusement, and to test my audiences palaeo-knowledge, let's play a quick palaeo-game.

Who can guess what type of whale (or Dolphin) I have recreated here? Super bonus if you can guess one of the possible genus of Penguin he is trying to snack on? The only hint I will give you, is for a sense of scale the Penguins are about a meter in length (in other words about the same length as my whale's head). Good luck!
Posted by Weapon of Mass Imagination at 3:38 PM

I will give you my assessment (though you probably know what I'm going to say.), rather than take a stab at your little challenge. I'll go ahead and say this again: Your CG is impressive and you have grown as a graphic artist. :) Maybe if you grow tired of teaching, you can strive for a position in graphic designing for the television industry or something.