So here I sit trying to get into a paper that I really don't want to have to do. It is my only one of the whole program, but I still don't want to do it of course. Now fret not. This will be a quick sweet blog distraction. I do actually need to warm up writing wise anyway...

To help me with this back home a one off favour has paid off in morale dividends like gold! 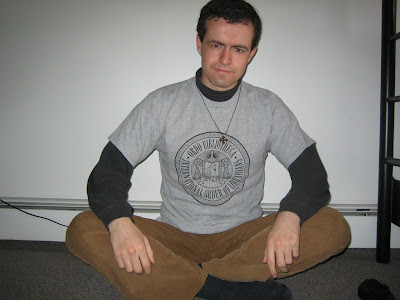 So Mike, here he is the lovable scamp, as you should know has been working for Marvel comics the last few years. Well the ultimate (not the comic series mind you) convention hit Cowtown a couple weeks back, and of course naturally I wasn't there. It had everyone from actresses from my fav show (firefly), to the creators of my second fav show (the DC animated series), and lastly my fav comic writer of all time Gail Simone.

Now Mike was invited by the convention to be a GUEST. Yeah that's right I'm friends with someone famous! Anyways in between manning a table of his own he managed to sneak around and talk to some of the celebs kicking around. 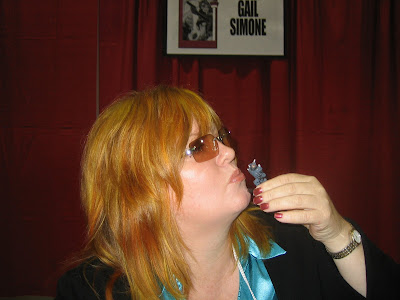 Including Gail. Now he grabbed her autograph on a few notable books, but they were all his copies (mine are all in storage back home). He did send me this pic though. Now you'll note the small thing she's holding in front of her face. I recognized it immediately as a figurine of my favorite lame super-villain Rhino from the battle game me and Mike play.

Making my day, and causing a slight scream of delight (sadly not kidding about that), Mike informed me that is MY Rhino Gail is pretend kissing. Oh yeah in your face losers! My Rhino!

So thanks to mike for making my otherwise blah day a bit better!

Now onto the paper. Shudder

Posted by Prehistoric Insanity at 2:55 PM

It sure beats remarking "lucky Rhino."