Have had a lot going in my life lately. Yesterday in particular had a particular nexus quality to it, with about 6 things all going down at once. Rather than one big post, I've decided to break this up into bad and good news posts. Partially as my good news still needs a day or two to get sorted out.

The first immediate and devastating piece of bad news is that I have been formally rejected from the Calgary Board of Education. So I won't be teaching in Canada anytime soon...

Without so much as an interview, I got a very generic letter stating I don't fit into the Board's ideals. How I don't fit in it doesn't say. Rather than take this personally (which it is hard not too) and assume this is do to with my application package I sent them, I need to remind myself of the more likely underlining cause. That being the 200 teachers they laid off as of yesterday...

In general these are "wonderful" times to be a beginning teacher. Of my dozen or so friends who all went into the teaching profession, only 1/3 are actual still teaching and most of them overseas. Yet people wonder why we're losing our edge? When we can't be bothered to invest in our education system...

Rather than end on this downer, another recent piece of news has hit my radar that has given me an employment idea.

The supposedly upcoming Hobbit movie is looking for a new director, while coincidentally I at the same time need a job. Hmmmmm 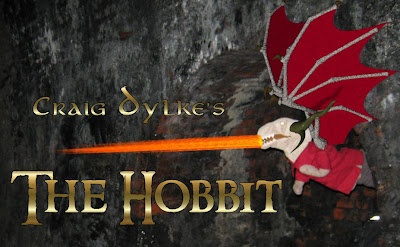 I propose I get the job! After all I'm qualified!

So there is my official application to become the new director of The Hobbit.

(Oh I just thought of another thing. How many fancy pants directors could throw together their own crude logo like mine above in under 5 minutes like me :P)

Posted by Weapon of Mass Imagination at 1:22 AM

Be sure to hire me as a gaffer. People tell me I'm great at gaffs.

Sorry to hear of your bad news Craig. But on a positive note maybe you'll get the Hobbit gig ;)