So life has been quite jam packed for me the past week or so...

On the same day as my rejection from the Calgary Board, I received a job working with a young boy with disabilities. Having now met with the family a few times we've got things ironed out so that I will be working with him every evening this last month of school, and than during the days in the summer.

Lady R is the best girlfriend ever, and bought me a new computer! Given its vastly superior performance over my old one (it renders in Carrara about 6-8 times faster!!!), and DAZ having a sale for the brand new Carrara 8 I broke down and picked that up relatively cheap (it was 50% off) new version of Carrara (finally!)...

So things are finally starting to pick up.

I've been too busy sorting stuff out for my new job (I have a pretty full on program to learn and set up), to sit down with the new Carrara and play much. Also most of its new features are pretty intense, and I'll need to sit down with the manual to get the hang of them. More to the point not having a physical copy of the manual I'll need to go to a print shop and get the PDF printed. However being 750 pages this is going to have to wait a little while!

I have plugged some of my "old" Dinosaurs into the new program, and no problems thus far. A few environmental factors didn't make the cross over for some reason, which is a bit annoying. In particular my water's caustic effects and tree bark shaders didn't get saved in the model files, and thus were left on the old machine. It is not the end of the world, it just means I have to manual copy them over to the new machine and tell my 3D models where to find them...

I've been toying with my "top secret" ART Evolved project while working on my job stuff. As I'm currently just trying to make the river work it is just a matter of adjusting the shaders and rendering. Given that the new machine renders the whole scene in 20 minutes this is making progress much faster (on the old machine this scene with plants and such would take over an hour!). 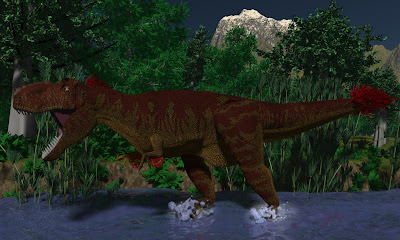 This was were I started on the new machine. It is a slight step back as, again, I lost all my tree bark in the cross over to the new puter.

While I liked the baseline of the water effects, the details were all wrong. The splashes were too defined, the colour of the mist and water were not working, and the whole thing seemed artificial. 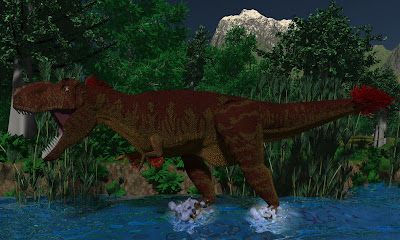 Tweaking the water colour and reflection I started to sort of step in the right direction, only the colour was too bright. Now my Rex was standing in a river of Cool-Aid OH YEAH! 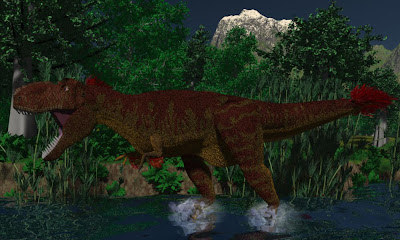 A key factor to water is its reflective nature. I'd only had its reflection up to 50%, so I cranked it up to 90% while darkening the colour and got something much better for the river. At the same time I made my splashes more transparent which removed the orb like nature of the water droplets, but the splashes weren't big enough and still not quite right on the colour scale. 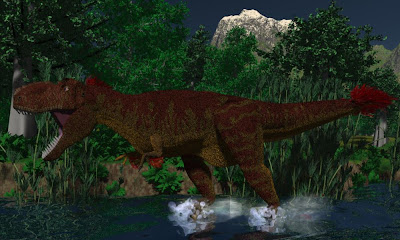 Expanding the splashes and lightening the colours I likes the size of the splashes, but not the brightness. 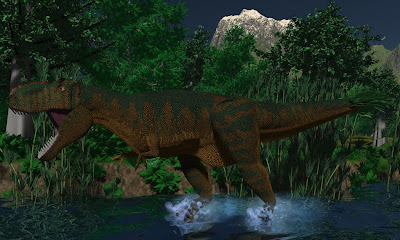 Darkening down the splashes and their mist I arrived here. I like this, and think I'm done on the water front.
I also decided I didn't like the red colour scheme of the T-Rex sticking out from the environment so much. A T-Rex doesn't strike me as the sort of animal that wants to stand out. So I applied the Larry colouration to the model, and like how it subtly blends in with the background. Though I need to tweak the feather colouration as they currently disappear all together.
Next I just need to fix the riverbank (which also lost its texture map), the tree bark, and play with Carrara 8's new tree systems that should let me add dead leaves to the trees and play with some other settings to get way more realistic looking plants!
Posted by Weapon of Mass Imagination at 12:49 AM

I'm glad to hear things are looking up for you Craig :)

Best of luck with your new PC. I like the splashes you added to your T-Rex!

Hopefully it only gets better from here...

Time to get the rest of the scene to the point of the splashes now...

Good to hear things are getting better. The rex looks great, very camouflaged.

I'm still a fan of rexies with no feathers at all, loved that last one!