More Than Meets the Eye

June has become a very important month for hallmarks and events for me in New Zealand. Sadly none of them are happy memories, and making them worse their all pretty much independent events (meaning I've had a few too many dramas down here!).

The only commonality between them is they all were part of my progression in becoming a teacher. Yet today I stumbled across a random unifying thread that ties them all together.

It was one year ago I became a registered Teacher in this country. This led to the long epic issues I had with immigration and be paid. Not something I wish to remember really. However my immigration papers need renewing here one year later. So on my way into to town to get some of this paperwork done, I stumbled across a funny reminder of another June event in my past life.

It was two years ago this up coming week that I failed a very critical posting. At the time it was the worst thing that had ever happened to me, and caused me a lot of pain and hardship in getting my Education degree. In hindsight it was a minor hickup in my life, but at the time very traumatic, and I don't miss that year of skool one bit!

Like you can see, not really related issues. Yet they became connected in a silly way today... 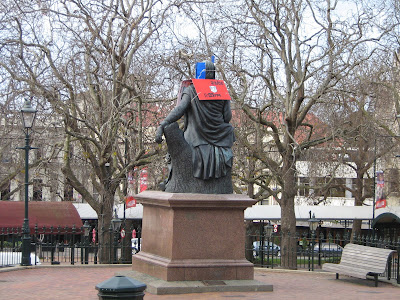 Driving into town today, I passed through Dunedin city square (called the Octagon). I couldn't help but notice the centre piece statue, Robert Burns, had be modified thusly.

To start off with, I am not a big fan of Robbie Burns as the mascot of this city. He never once in his life visited New Zealand, that alone Dunedin (his nephew lived here is the vague connection). Furthermore there are plenty of cool local people who deserve the recognition of being the main statue in town. They also did more worthwhile things then write stupid bar poems...

Anyways with my disregard for this statue in mind, as I drove by it I couldn't help but be curious. I assumed the defacement of Robbie was tied into a local support rally for the ongoing Iranian civil disorder. 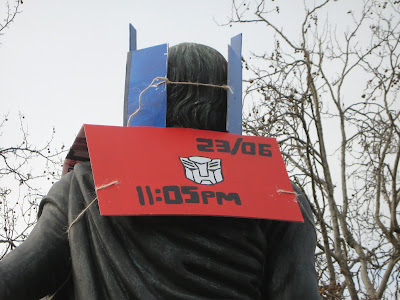 Getting closer I discovered it was a clever viral ad for Transformers 2. 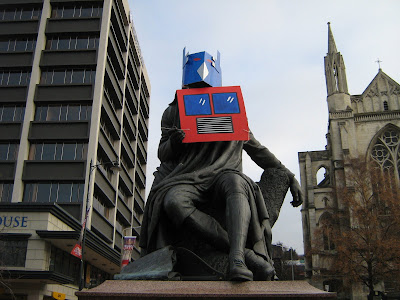 Someone has "transformed" (pun intended!) Robbie Burns into Optimus Prime. A change for the better here in Dunedin if you ask me!
So how does Optimus Burns tie together my two dark anniversaries?
Well I was in town solely due to my immigration stuff of last year. So that is its part in this "tale" I've constructed.
As for 2 years ago, the only good thing to happen to me on the day I failed (I was in a dreadfully depressed mood let me tell you) was it was opening night for the first Transformers movie. So I went to see it, and it miraculously pulled me out of my dark brooding unhappiness.
Despite the fact it is an awful film, I really love it. It holds a special place in my heart like Independence Day. I'm wrong for liking them, but they were key morale boosters in tough times of my life. One of the odd powers of film I guess...
Needless to say I'm primed (oh! second pun intended!) for the new Transformers. Even though I'm sure it'll be pure cheese like the first one...
Oh and that is the end of my tale of two dark Junes... this June has been brilliant in comparison, and has seen no dark events go down in my life... yet anyways... 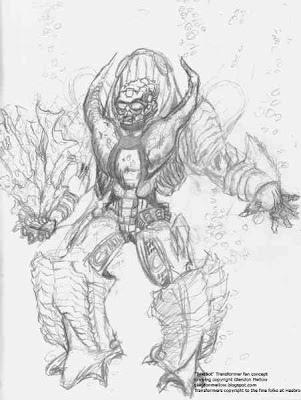 This was not the first viral ad I'd hit for the movie (I'm still not sure if this was some nerdy students prank, or a move by the movie theatre DIRECTLY across the street from Robbie's statue... probably the latter, but in this student town you never know).

Glendon over at the Flying Trilobite did this awesome Autobot Trilobite called fittingly Trilobot. Which was my first real reminder the film comes out very soon!

(Speaking of Trilobites you have to go check out Marek's 2 part article on Trilobite eyes and vision. Here are your complementary links to Part 1 and Part 2 :P) 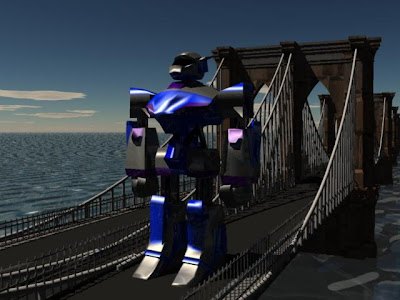 Speaking of the deep dark past, here is my lame attempts at a transformer from 2 years ago! Before you compliment me on anything here, the only thing I did was make the water. The robot and bridge are models that come with Carrara. I simply redid the robots shaders.

I thought someday I might revisit the giant battling robot genre, but it hasn't come up yet. Who knows after seeing Transformers 2 I might be re inspired, and this time bringing my new 3D kung fu to the table!

Posted by Weapon of Mass Imagination at 8:34 AM

I think you might mean "More THAN Meets the Eye." And in a few other places too "than" - not "then" - sorry can't help myself.