It's good to know my University knows who I am!

In my efforts to get the pay owed to me (oh I did finally get paid some of my money), I need to prove the extent of my education and qualifications.

Which means transcripts and similar fun things (like notarized copies of degrees and diplomas). In my effort to get a transcript from the University of Calgary it was very reassuring when my account came up as this. There's only one small mistake, but it is a key one. Can you see it? 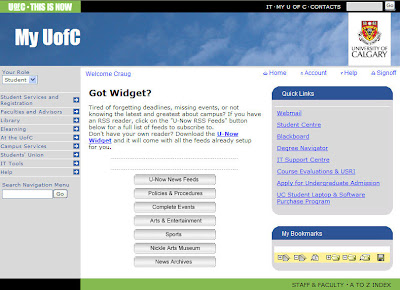 Now I don't have many nice things to say about UoC. Their more of a machine, trying to process as many students with as little effort as they can, than an educational institution. I'd like to say this is a new low for them, but sadly its more the norm. Like that time I was forced to cancelling graduating due to the setup of their website. That's another story though.

At least I have yet a new nickname based on someone's misspelling of my name. Though Kristin's were much funnier for "some" reason.
Posted by traumador at 8:00 AM

Is University of calgary an online college? Well, I don't know what to say or whether it's good or bad. Hope everything is going well for you dude.

Craug! That should be your neanderthal name.

I still like "Craug Mortram" - but aren't you glad I didn't think of that 27 years ago?