Righto so the conclusion to a already great weekend was a impromptu fishing trip with my new partner in crime Scott. 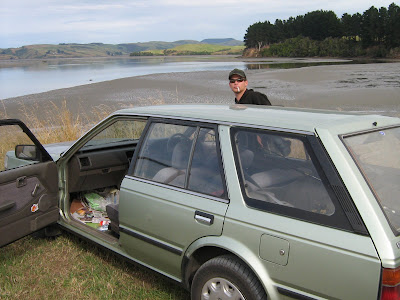 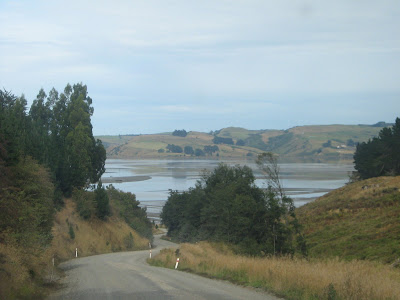 It is located about an 1 and a half south of Dunedin. This was the FIRST time I have left Dunedin since I arrived there nearly 2 months ago (it is 2 months on my bday midweek here...). 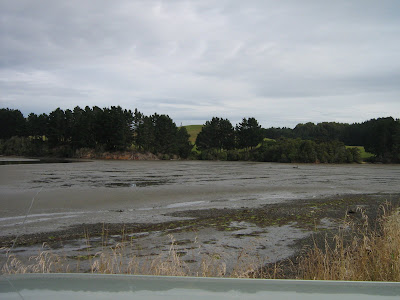 Cannibal Bay the place is called. It's a very large estuary that we hit at about 11am just as the low tide hit it's peek. Meaning that while we were there the tide was steadily coming in.

We waded into the water about knee height and began lure fishing (my first time fishing in over 7 years, and the FIRST time ever without a fly!). Now this had two interesting events occurring while waiting for fish. The first was the swarms of sandflies that acted for intents and purposes like mosquitoes ate me alive. My legs are COVERED in red mozzie like bites. Boo! 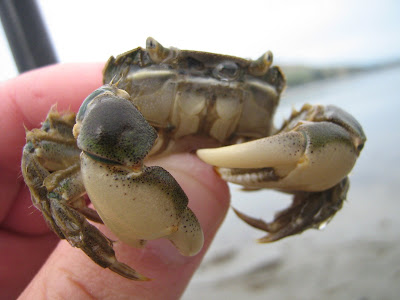 The second being every 2 mins or some I'd get a tickle or pitch through my gator sandals. Looking down would be a crab(s) that had scurried up to my foot through the short, but infinite kelp mates surrounding us.

Now though I was pretty into the fishing thing you can't expect a Crab hunter like me not to pickup a few, and check them out. Among today's Crabs were all new species again.

This one being a representative of the most common variety here in the estuary the Smooth Shore Crab (which is VERY similar to BC Crabs I'm used to, but their pincers are a bit bigger). 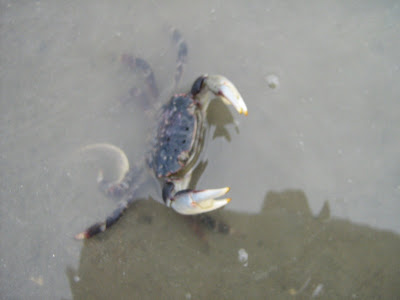 All the Crabs here at Cannibal's Bay acted like the Crabs I know back home. Paranoid and aggressive. I received a good snip or two from these guys, but like usual it was worth it just to get the Crab Kung-Fu pose like this one! 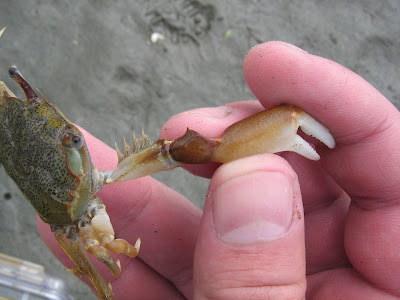 Though the Smooth Shores were fun and interesting, they were everywhere, and kinda close to what I'm used to seeing. Fortunately like so much else of New Zealand this place didn't let me down.

Along the muddy flats were a species of borrowing Crab with the longest arm to body size ratio I've ever seen. These Tunneling Mud Crabs are as cool as Spider Crabs, and just as hard to catch (most of my bites were from these guys as they can reach RIGHT back to your fingers on their hind quarter. I found the best way to catch there guys is a top based grab that pins their arms to their chest).

You find them in a holes along the beach, and if you dig up the big holes you get big Crabs. Sadly we discovered this origin for them too late (when the tide was coming in quick and fast) so we were unable to turn up any big ones this trip. 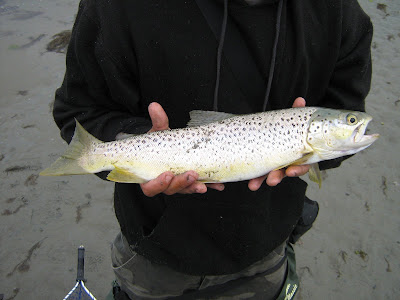 Speaking of the trip let's return to the point of the story. Fishing. Which I partook in to the max. So much so in fact that I caught the days only catch (poor Scott). A nice 2-3 pound Brown Trout. Now what makes this guy so unique is the fact that is among the only Trout species in the world that is OCEANIC. You read that right. This guy lives a life style similar to that of a Trout.

Now I didn't get to see if it tastes like a Trout or Salmon as I didn't have a fishing licence, and frankly I don't need food at the Hall I opted to release this fellow. Scott was keen on the idea as he enjoys catching them more then eating them, and as he put it "I'm all about looking after my fishing grounds". This healthy female hopefully will make it onward to give birth to several more targets for our next trip out here.
Posted by traumador at 4:53 PM