So as some of you know I was really disappointed with the majority of soundtracks last year. The only one real worth mentioning was John Powell's Ice Age 3. It was so dire last year I found myself seeking comfort in Jerry Goldsmith albums from the 80's I had never heard before (which I'm kicking myself for not finding sooner... they were all SO good!).

As I've been noticing a significant downturn in soundtrack quality the last few years, mostly due to the identical and bland popcorn soundtracks pumped out by Hans Zimmer clones and wannabes (a post on this will happen I'm sure), I was beginning to fear that my beloved music genre was dying...

Yet this year has hit me over the head early on with two of the strongest soundtracks ever released! Which at moment has me hopefully that the last few dull years have been build up for a fantastic year... Though that does remain to be seen. For example Iron Man 1's music was miserable overall. I'm not holding my breath on #2 being any better.

I'll do proper reviews of these two later, but here is a preview of why I'm so stoked about 2010. 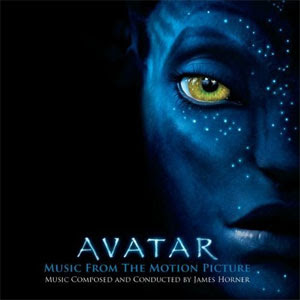 James Horner's Avatar. Yes while technically a 2009 release, it was just barely in coming out late in December. I didn't get my hands on it till January, so to me this is a 2010 album.

I have always loved James Horner's work from the 1980's, but his constant repetitions of these sounds caused me to venture away from him seeking new sounds. Though Avatar still feels like a Horner album, not being familiar with his modern sounds (about 50% new) made this a refreshing revisit to his work. Plus from what I've read in the soundtrack community, Avatar represents an odd instance of Horner leaving his comfort zone and taking his old material and reworking it to the point of making it almost new.

This album is Horner's equivalent to Howard Shore's The Lord of the Rings in its scope and execution of themes. The themes for the alien Na'vi in particular are all superb, and woven throughout the music masterfully. We get everything from a love theme, to some impressive awe music, to action.

It is not as flawless as Shore's LOTR, but I wonder if this is due to the limited nature of this initial album. We only get 1/3 the music, much like LOTR's initial albums. I initially disliked the Return of the Kings' soundtrack, but that was due to abysmally chosen limited content on the commercial release. The extended full score proved it to in fact be the best of Shore's music... I just had to wait for it all to get properly presented...

Hopefully we get the full score for Avatar at some point.

Yet despite my comparisons to LOTR (I would argue the most incredible franchise music ever written... but not my absolute favourite score of all time though I'll point out. I recognize brilliant construction through personal taste) Avatar is not the break out album of the year... at least now.

In the animated genre John Powell has finally released the score I have been waiting for him to do! As you'll know from my last post covering animated soundtracks, I'm a tremendous John Powell fan. Yet despite my love of his overall work, each individual work has been lacking on one level or another. Having the extreme fortune of a wealth of discs to mix, I've always made by combining his material to cover all my desires and bases.

Yet with his new How to Train Your Dragon we get a disc that rivals Powell's previous contenders, when he was co-writing with Harry Gregson-Williams. The score is solid from start to finish (ignoring the annoying Emo-ish rock song that is not his towards the end), and adding to this the highlight moments all match Chicken Run in their intensity and enjoyability! That is saying something. Chicken Run has always been my hands down choice for highlight material (as an overall disc it is hit and miss). How to Train Your Dragon has simply blown my socks off, and made me very happy with 2010!

So I'll get around to proper reviews of these later. I've already written more about them then I'd planned.

Hopefully I'll have a few more breakouts this year, and I can just fire up a best of 2010 post.

Posted by Weapon of Mass Imagination at 6:59 AM

I've got that Chicken Run song as good as stuck in my head, and now there's a new soundtrack that's just as epic? Yay.

I haven't heard many of these soundtracks as I haven't seen all those animated movies. Got to check them out then!