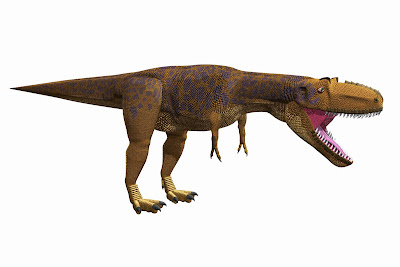 Here is what Lillian ended up looking like after an afternoon of TLC. I think she actually looks pretty darn cool... 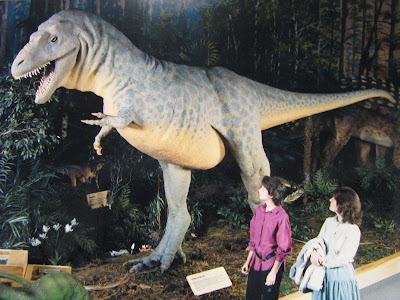 She just is not looking much like her inspiration, my all time favourite statue by Brian Cooley, formerly on display at the Tyrrell . This is a old promo shot I came across of the original "Lillian" statue from the 80's (which you can tell from the clothes :P)... 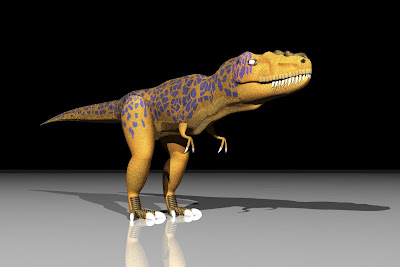 My first Mark 2 model never exactly matched the original sculpture either, to be fair. Though I did try my best with my much more limited skills in those days. 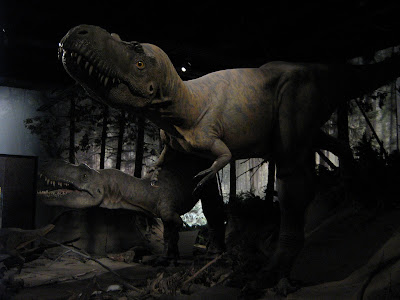 However my new Mark 5 is a total departure from the sculpture. My more attuned sense of accuracy has led Lillian 2.0 to look more like Mr. Cooley's modern era Albertosaurs he built to replace Lillian for the "new" (to me anyways... as I've been away a while) Cretaceous Alberta entrance to the Tyrrell.

My excuse, I guess could be that my Lillian went on a diet after leaving the Tyrrell and lost all her excess bulk. Especially from around her throat region.

However this raises an interesting problem for me. Do I want my CG Lillian to look like the original sculpture or do I want my own take on the "character"?

I originally turned Lillian into a character wanting to keep something of the statue "alive", as the Tyrrell was in the process of getting rid of it when I left the museum. That statue has always been the face of the Tyrrell to me. We go back a long way. I visited Lillian every year between her unveiling in 1985 all the way up to her departure in 2006... (In good news Lillian was donated to the local high school and thus saved from the dump as I'd feared back in 2006.) My motivation was not to copy Mr. Cooley's work, but rather pay tribute to it.

So what do you think?

Is mine still Lillian enough?

Am I copying Mr. Cooley's art too much?

Can mine survive being the same or different from the original statue?

As a funny wrap up, in case you missed it, here is the behind the scenes origin of how Lillian became Traumador's love interest... It's funny how these things happen. Who knew this one tiny gag would have me worrying so much years later?!?

Posted by Weapon of Mass Imagination at 10:32 AM

When I'm working on a creative project, I always have a paleo-metaphor in the back of my mind. "This is just part of the fossil, and I won't know what it is until I get the rest of it out of the ground."

By which I mean that I'm exploring, discovering -- but the work itself is complete already, and its nature is out of my control.

Lillian's taking her own shape. I'd say that results beat intentions every time.

she has your style deep within her.

I think it's okay to make Lillian your own while still holding Cooley's statue as your inspiration.

You know that art almost never turns out the way you intend it to, but that's doesn't mean it turns out bad. It's still good, just a different way of being good.