Trying to make the world a more interesting place

Glendon over at The Flying Trilobite has a great post about what inspires his art. Which got me thinking about my own "art". What makes me think or and do this stuff...

For starters Glendon is a MUCH better artist than me. Not only does the quality of his work prove this, but also the fact he has a much better rational for why he creates. I just wanted this stated before you head over there and look at his and than laugh at my stuff. I'm aware of the difference in ability believe me!

Unlike Glendon I do not have a central premise (in his case using modern science as an inspiration for artistic expression) for why I do what I do. Heck I don't usually even think about the emotions or symbolism of what I do. So why do I do it? Isn't that the point of art, to connect to others humanity through emotional stimulation through communal recognition of patterns and symbols?

Does this then mean I'm not making art. Am I rather simply creating stuff to fulfill some sort of useful function. Like how a trade or crafts person create things for use by people to help them live their lives. Or yet still does this mean I am truly crazy and bizarre, and that I make stuff for no reason at all?

I think the answer has elements of all three possibilities. One of the key issues I have, that Glendon does not, is that I am not particularly talented with any medium as of yet. Meaning that I have an immediate barrier to trying to communicate what I have inside to the outside world.

The only medium that I can conjure anything remotely descent with is 3D computer graphics. I started tinkering with these back in high school ages ago, when the dream was to do movie special effects. Sadly it wasn't to be, but I stuck with the 3D stuff as a hobby all this time.

The big break my talents got (if they could be called talents back then) came when Prehistoric Insanity started up, and we started making the summer movies. Here I had something more than ideal fidgeting to apply the program too. Which of course had been the purpose for my tinkering, and frankly the $1500 camcorder I bought a couple years before this (that hadn't gotten much use).


This logo made in 2003 for Prehistoric Insanity was the first time I made something for actual use with my 3D program. Not that the logo was for anything other than a flashy beginning to an otherwise crappy sketch video (to check out the only worthwhile clips click here), but my efforts to get something sort of looking like Finding Nemo (a movie that still hurts my 3D mind to watch) caused a drastic improvement in my abilities and product on Ray Dream (my program of the time).

Thinking back on this experience it gives me insight into my own artistic muse. That is simply to make stuff that looks "better" than the last thing I did.

Not the best thing to admit, but one of my key reasons for making stuff is simply to practise!

Lame I hear you saying, especially compared to Glendon's personal profound philosophy and methodology, and frankly I kind of agree. Yet it has gotten results!

Sadly I've lost a lot of my older work with the move to New Zealand, and the switch of computers it brought. Here I present to you a fragmented history of my practise muse driving me to render a better virtual Dinosaur.


Though there was a earlier version of this T-Rex, you get a pretty good idea of what my first Dinosaur looked like from this clip of the UNOFFICIAL Training Video.

With this as my starting point you can see my practise muse at work as I kept coming back to the Tyrannosaur throughout the years.


A huge step in my 3D Dinosaurs came in 2004 during my second year as an science interpreter at the Tyrrell. Without the need for staff training, I was given projects to keep me occupied for the slow first two months of the summer season.

With the education department starting to contemplate the transfer to digital media, they were very interested when they learned I could "do 3D stuff" with the computer. We decided a good use of my time in the office was installing Raydream on a terminal and me creating this little fossilization animation. Which I understand they still use to this day.

You'll note this is a totally BRAND NEW built from scratch T-Rex from my first, which I built on the museum's computer. 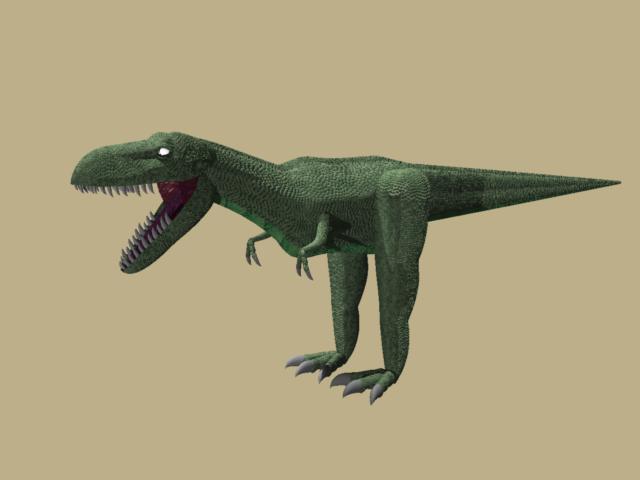 In 2006 a big change in how I made 3D stuff came in the form of Raydream becoming a new program called Carrara. I reluctantly swapped over, and to be honest despite that initial steep learning curve, it was one of the best decisions I've made.

This was one of the early products. A slick yet again new build Tyrannosaur (actually this was meant to be an Albertosaur, but that'd be splitting hairs). 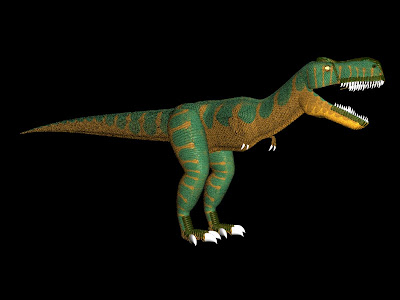 Than in 2007 came the break through of where I might claim some skill at CG. Larry the Tyrannosaur. He was both a rebuild of parts of my Carrara T-Rex (he has a whole head for example), but also my first dabbling in photoshopped textures. Something I'd never done before.

With the lessons learned from this models use, and my much improved photoshop skills it was time for a new version. 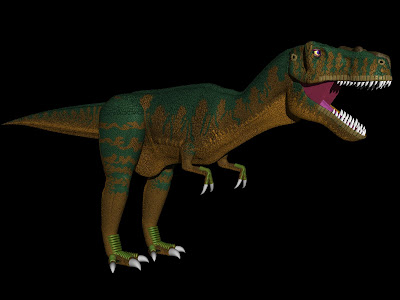 So here is the current product of my practise muse. A pretty big improvement from my early days I'd say. Still it's no Jurassic Park either. 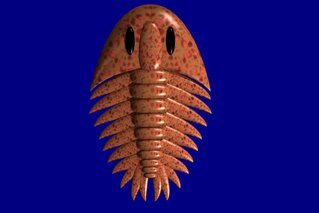 I thought another good example of this practise motivator for my art would be my efforts with virtual Trilobites. If even just for Glendon's sake ;p 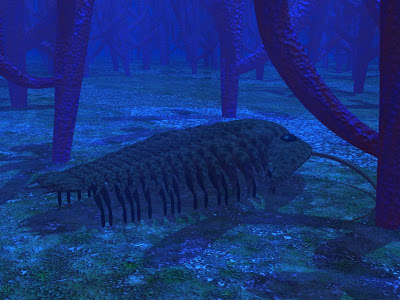 So do I actually make art? I'm not sure. I definitely don't have formal training in it beyond high school. During this time my teachers would yell at me for drawing nothing but Dinosaurs and Spaceships. Which really hasn't changed. So were my teachers right? Am I not doing art.

Quite probably not. At least outside of the context I intend for them... Oh you weren't expecting a twist?

You see I have a practical function for my 3D much like the aforementioned trade or crafts person. Remember I wanted to be a special effect guy when I grew up, and though I didn't manage this in reality, I still pretend at it in my spare time.

As one of my favourite past times both at work and off time is conveying to the world just how boring I think it really is, Dinosaurs and Spaceships suddenly fill a key artistic role.

They symbolize to me the wonder and awe I used to hold for life and everything contained in our universe. Sadly I find myself typically surrounded by a world that wants things to be dull and small. Now Dinos and Rockets are almost sad reminders of how dull real life can be. So another of key my inspirations is trying to use these sci-fi sorts of things to remind me life had or has potential (see the dual temporal nature of my symbols) to be as awesome as I know it should be.

In my head things like this should be all the more common place!

Another thing that really drives my creative process, and is definitely a muse is the music I listen too. This will probably get a post or two of its own later, but for those of you out there who didn't know I listen to pretty much nothing more than soundtracks.

The reason soundtracks? Being that I have a very narrative/story driven imagination this music fulfills what I need... Though it has been argued as this is all I have ever listened to that is why my brain works this way, but its a chicken and the egg sort of thing for me. 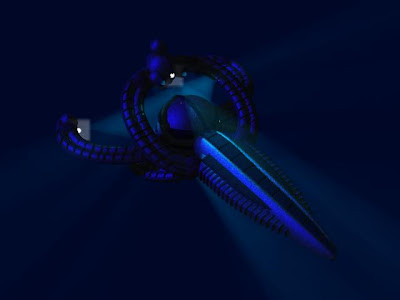 Often it is nice to make the things that I think of when listening to some key pieces of music. This submarine was almost solely inspired by James Newton Howard's Lady in the Water score. Peter Bond jumped on it the next day, and we nearly made a movie about it, but it started solely as something coming from my headphones. 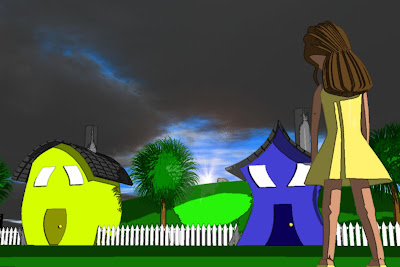 I have recently been trying to use my new "skills" for a legit "art" purpose. This is a sample page of the children's book me and my buddy Scott made last year. Still waiting to see if we can sell it successful. 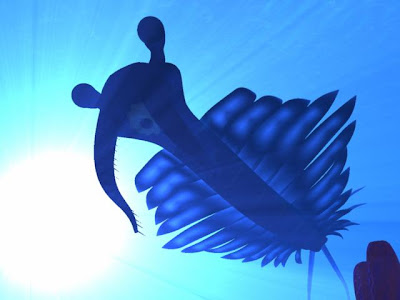 Also I see something to bringing prehistoric animals back from deep time through this. I think this Anomalocaris could actually make the cut against any other out there. Granted just from this angle and in this lighting mind you. 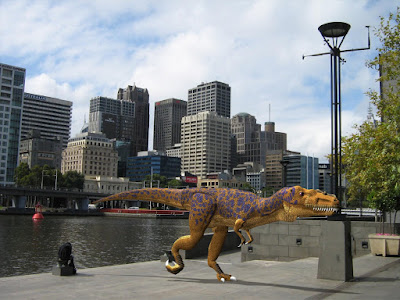 My imaginary friend has also become a real inspiration. Which takes elements of my present and former life and makes them more exciting and fun. My current favourite has been the turning the Tyrrell's statue Albertosaur "Lillian" into Traumador's current crush. 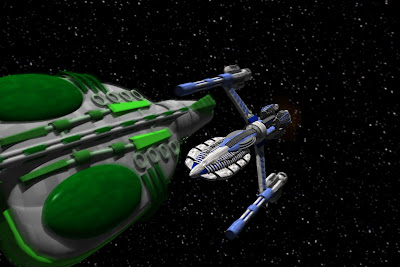 So despite my lack of a single inspiration or a coherent post, here's looking to the future, and the almost art I'll be churning out! (This last picture being the spaceship from my most recent movie project Delta Patrol. Check out its production here).
Posted by traumador at 6:12 AM

First of all, thank you for the effusive compliments. I try.

Second of all, your work is fantastic, so please don't put my stuff on some kind of pedestal. (although the shale pieces would look nice...) ahem.

Just look at the amazing diversity of work! I hadn't seen the illustration for this children's book before, but it's so intriguing!

You run the gamut from being able to make what looks very much like a modern cartoon cel, to amazing lighting underwater on extinct organisms, and then hard sci-fi images. There's nothing lame here, just hard work and talent.

It's also important to see that when I get an image in my head, there may be no rationale for me either.

Then I kind of run it through a mental filter. Is it something I can do with oils? Is the science correct and saying something evocative? Is it evil-looking (I'm trying to avoid this...it just happens).

But the imagination is filled with flights of fancy. It's not something that can be directed, more just nudged and built upon.

hmmm " imagination is filled with flights of fancy"

Sometimes I totally know what you mean, but than other times my imagination is like a run away train!

Peter is often known on our productions as Craig's handler, because I go way off the deep end as my imagination overruns our moderate filming capabilities.

As for the kids book its called Sunnyside of the Hill, but sadly my coauthor will kill me if I reveal anything more. We're in the midst of approaching publishers (not a fun process so far I shall add!) so we feel we need to be hush hush. Nothing personal.

Evil-looking. Heck I wish more of my stuff fit into that catergory! It is a very powerful tool to be able to make thing appear sinister and dangerous. Granted its great for story telling... So maybe I have an inflated sense of its importance ;p

oh, so this is how everything began!
nice butterfly effect

Craig don't beat yourself up!! You're an amazing artist. Heck, I was in your position once. I can relate. After years of practice, I have made huge improvements. Just keep practicing. Art is defined as personal expression in any medium. It's art. I am amazed at your craetivity especially with bringing the Tyrannosaur Chronicles to life. In fact, I love reading about Trauamdor. One question. When I'm emailing Traumador, am I really emailing you?